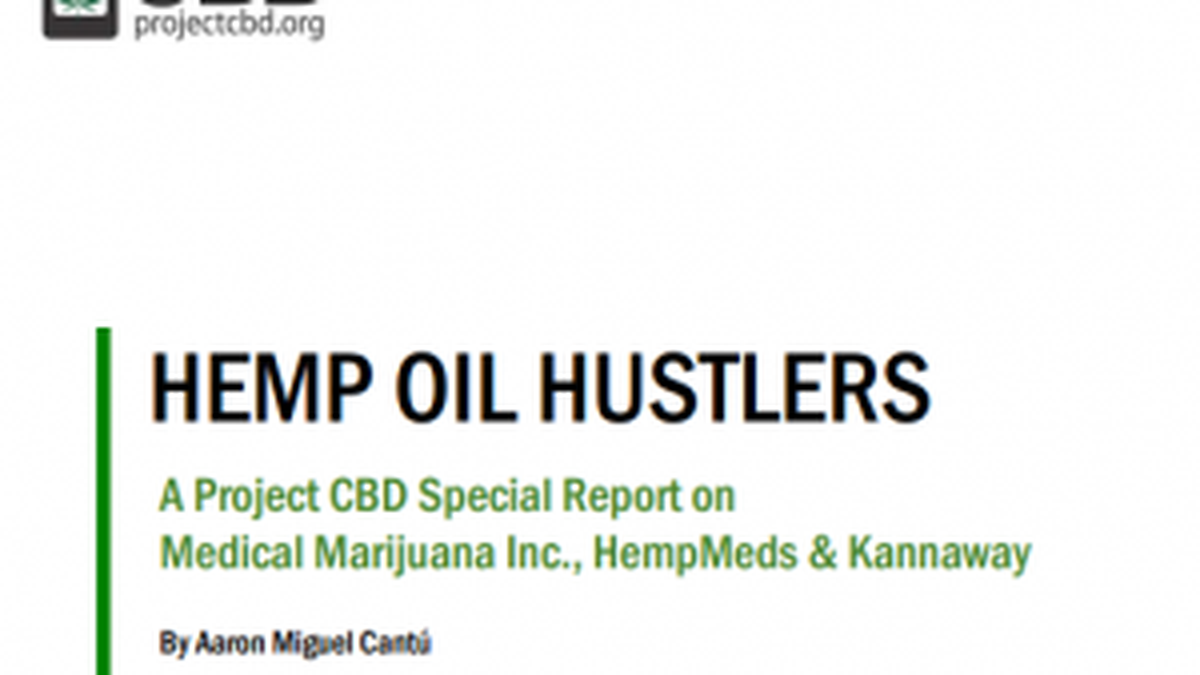 What is this I keep hearing about “legal,” “high-CBD” “hemp oil”? Some folks online are actually asking me to help sell it.

Entrepreneurial in the East Bay

Buyer beware, EEB. It’s likely postmodern snake oil, and hustlers of the stuff abound. The topic of hemp oil could fill both a medical and a legal book, but the bottom line is you wouldn’t take a 1930s tonic for cancer, so don’t make an exception for alleged high-CBD hemp oil sold online. Demand credible third-party proof of safety and efficacy.

Here’s why: When people say, “CBD,” they are referring to cannabidiol, the second most active molecule in marijuana. Cannabidiol has a variety of therapeutic effects: it’s an anti-inflammatory; an anti-spasmodic; a neuroprotectant; and has anti-tumor properties. Cannabidiol also dampens the euphoric effects of pot’s main active ingredient, THC. That’s why black market breeders nearly bred CBD out of pot before the rise of medical cannabis in California, beginning in 1996.

But thanks to Proposition 215, which California voters approved that year, CBD has come back in a big way, with a number of breeders now selecting plants for high-CBD production in the Bay Area and throughout California, along with Colorado, Washington, and Europe.

Once found in trace amounts, such as 0.1 percent of the dry weight of the plant, CBD levels now reach upward of 12 percent in flower buds. Those buds get refined into high-CBD edibles, topicals, and extracts, such as CBD oil, and can be found in the Bay Area’s best dispensaries.

CBD also has become a global celebrity thanks to press coverage by CNN’s Dr. Sanjay Gupta and others in the media. We’ve reported on kids with untreatable epilepsy who have benefitted greatly from CBD. It doesn’t work for every child; but no drug does, Dr. Gupta told me. The positive outcomes related to CBD made him switch sides in the medical cannabis debate and he now endorses legalizing pot.

CBD is still illegal under federal law — even though it won’t get you high and it dampens the euphoria of THC. The government classifies CBD alongside THC as a Schedule One substance that has no medical value and a high potential for abuse. So you can’t get high-CBD products at Walgreens.

But industrial hemp is not grown for medical use (China is the world’s largest producer of it). Industrial hemp can contain trace amounts of CBD, but how the hemp is grown, harvested, and extracted currently makes it a suspect source of CBD, Project CBD stated. One of industrial hemp’s uses is as a remediation for toxic soil — a fact that could make it dangerous to consume. “[H]emp is a bioaccumulator — it sucks up contaminants from the soil. Fungi-derived mycotoxins that resist decomposition are another concern,” Cantú stated in his report.

Project CBD’s investigation included lab tests that found “significant levels of toxic solvents in samples of Real Scientific Hemp Oil (RSHO) Gold, which is marketed by HempMeds, a wholly owned subsidiary of [Medical Marijuana Inc.]. These samples were submitted to Project CBD by people who say that they or their children became ill, in some cases, violently ill, after they ingested RSHO Gold.”

Medical Marijuana Inc. (MJNA) has claimed that the Project CBD report “is based upon false, inaccurate and misleading statements.” MJNA is suing two Colorado labs involved in the study, MMJBusinessDaily.com reported.

MJNA was founded by two former marijuana smugglers, Bruce Perlowin and Don Steinberg, and is one of 59 shell companies of Blackout Media, founded by an imprisoned penny-stock fraudster. MJNA’s subsidiaries are “aggressively targeting” parents of children with serious disabilities “to profit from CBD’s growing reputation as a miracle compound,” Project CBD stated.

One of MJNA’s subsidiaries, Kannaway “may qualify as a pyramid scheme based on guidelines published by the Federal Trade Commission,” Project CBD reported.

A red flag is any company that asserts that its hemp oil is “legal in all fifty states.”

“Either they are bluffing to make it appear as though they are operating legally — or they are extracting the oil in a way that makes a dangerous product more likely,” Cantú stated in his report. “Extracting cannabidiol from hemp stalk ups the risk of concentrated, bio-accumulated contaminants because so much plant matter has to be processed to get any CBD.”

According to Project CBD co-founder Martin Lee (author of the 2013 book Smoke Signals), consumers need to beware. “There are European companies producing decent-quality CBD products from industrial hemp, but these are mainly in the pipeline, not here yet. Importing CBD oil legally is still a quagmire,” he told me.

Patients should demand proof of “rigorous quality control and safety testing” of any hemp oil product, Lee added. “But most analytical labs servicing the cannabis industry don’t perform this level of testing.”

Intrepid patients can grow their own CBD-pot strains, make simple extracts, and even get them tested at Bay Area labs like Steep Hill and CW. And shoppers can demand detailed labeling with credible, third-party certifications for CBD and THC content, and the specific source of the CBD.

The Bay Area already has high-quality CBD products. And locally grown, CBD-rich pot “is a better source for CBD than industrial hemp,” Lee tells us.