.As American as an Apple Fritter 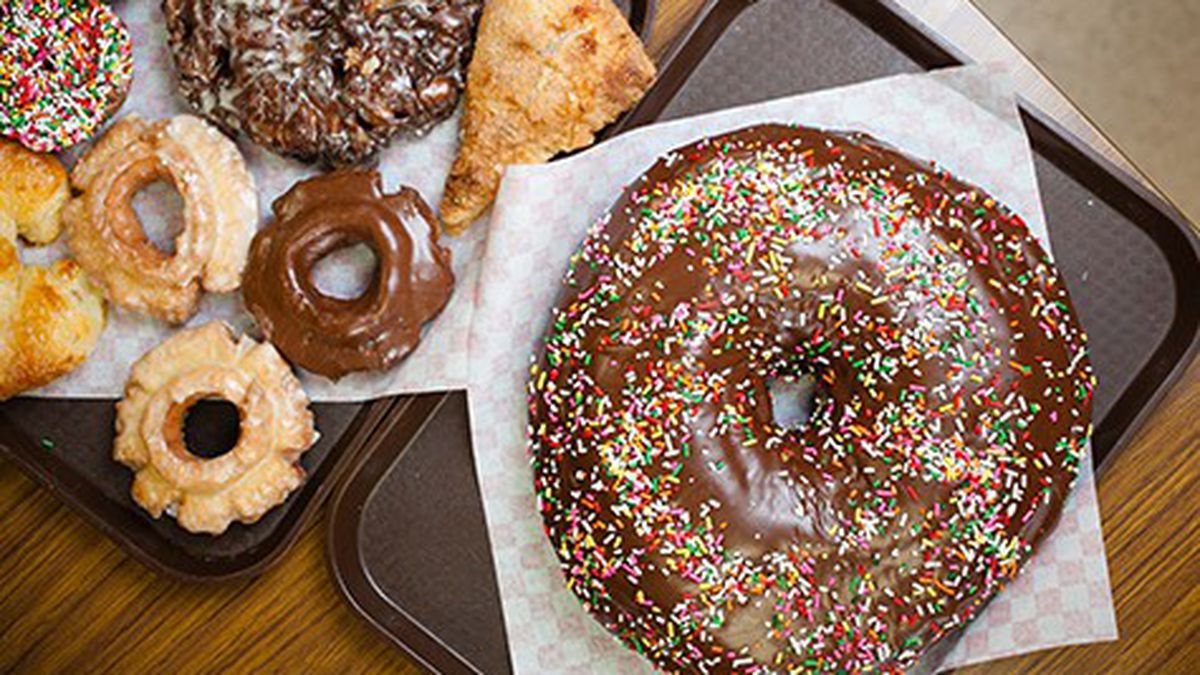 If you grew up on the East Coast, there’s a pretty good chance that the doughnuts of your youth came from Dunkin’ Donuts — boxes of them, glazed and sugar-dusted, that you’d wash down with giant Styrofoam cups of too-sweet coffee. Lately, the mega-chain has been making noise about expanding to the Bay Area, with a location in Walnut Creek already announced, so I figured as an East Coast transplant, I’d let you in on a secret about Dunkin’ Donuts: The doughnuts are not good, and, despite the mega-chain’s attempts to rebrand itself as an all-purpose breakfast spot, neither is the rest of the food.

That’s doubly worth noting because of the rich legacy of independent, mom n’ pop doughnut shops that we have in the Bay Area — most of which, it turns out, are owned by Cambodian Americans. Doughnut shops such as World’s Fare in Hayward and Homeskillet in Alameda offer a kind of geopolitical history lesson, and stand as testament to the knack that so many immigrants hold for finding a way to make a living.

As documented in a recent California Sunday Magazine feature story, “Dunkin’ and the Doughnut King,” many of the Cambodian refugees who settled in Southern California after fleeing Pol Pot’s reign of terror during the Seventies and early Eighties wound up opening doughnut shops. Earlier immigrants helped later ones, and those who were ambitious branched out on their own to other parts of the state. That’s why, to this day, the majority of California’s independent doughnut shops are Cambodian-owned.

Located in a Hayward shopping plaza, World’s Fare was purchased in 1987 by its current owners, Kelly and Andy Yam, who left Cambodia for the United States in the Sixties. Even if the doughnuts were no better than average, this would still be one of my favorite places to people-watch for a couple of hours on a Sunday morning. Everything about the place is slightly over the top — from the size of the doughnuts (which I’ll get to in a minute) to the gaudy kaleidoscope of scratch-off lotto machines that cover nearly every inch of available wall space. At almost any hour of the day, you’ll see at least a couple of true believers camped out at a table, nickel in hand, working their way through a stack of scratchers as thick as a modest paperback.

The clientele is mostly a cross-section of Hayward’s working-class Asian-American and Latino populations, and both the staff and menu reflect that mix. So one of the great pleasures of a meal at World’s Fare, once you go beyond the doughnuts, is the fact that the beverage options include Vietnamese coffee, boba tea, and Mexican milkshakes known as licuados — the strawberry one is better than what you’ll find at most taquerias. The simple but satisfying breakfast sandwiches feature bacon or ham, fluffy scrambled eggs, oozy melted cheese, and — for a Mexican touch — pickled jalapeno, which provides a tangy heat that’s a perfect counterpoint. If you’re feeling frisky, get one of the doughnut sandwiches, in which the aforementioned ingredients are piled inside a split glazed raised doughnut. Who knew that jalapenos, sugary fried dough, and sticky fingers make for a winning combination? (Apologies to my blood vessels for what I did to obtain that knowledge.)

Among other distinctions, World’s Fare makes what are probably the biggest doughnuts I’ve ever seen. The admirably fluffy apple fritter, for which I paid a modest $2.25, was so big that — hand to God — it took my family of three three days to finish eating it. Even the “normal”-sized doughnuts are so big that they look as though they were made for giants — and, despite that fact, they’ll only run you a cool $1.10 a pop. In this day and age of the $3 bourgeois doughnut, that’s something of a miracle.

A pro tip for your next special celebration: With a day’s advance notice, $15 will buy you a doughnut the size of a birthday cake — roughly the circumference of the steering wheel of a car, and as thick as a Double Whopper.

Again, a big part of the charm of World’s Fare is that it doesn’t try to be a “fancy” doughnut shop — that it’s the kind of place where you serve yourself coffee from a thermos and have to dig around a bit to find a dairy option other than a giant tub of powdered creamer. Somehow, the coffee tastes just right.

During my most recent visit, we decided that when in Hayward we should, as my dining companion put it, “do as the Haywardians do.” So we sat down with a modest stack of scratchers and got to work. You don’t need me to tell you how this story ends: We didn’t win a damn thing, but I still went home feeling lucky beyond belief.

Over in Alameda, Homeskillet has only been open since January — but it, too, has as its foundation three decades of doughnut-slinging experience on the part of its Cambodian-American proprietors. Co-owner Lean Ma explained that her father, Dan Lu, was part of that early wave of Cambodian immigrants who opened doughnut shops in the Los Angeles area in the early Eighties.

To an even greater extent than World’s Fare, Homeskillet straddles the line between a restaurant and a conventional doughnut shop. It’s essentially a classic diner that also happens to house a full-service doughnut shop. This is a brilliant combination: Who among us hasn’t had a doughnuts-for-breakfast suggestion shot down by health-conscious dining companions — the kind of spoilsports who demand a full selection of breakfast entrées beyond the doughnut shop’s obligatory bagel sandwich? And, given how much Americans like to mix sweet and savory at the breakfast table, who would say no to the offer of a fluffy glazed raised as prelude — or postscript — to a plate of bacon and eggs?

The original Homeskillet, which Ma’s brother opened two years ago near San Francisco’s Union Square, is a breakfast-and-lunch spot that doesn’t sell any doughnuts — a decision that was made because there were already so many doughnut shops in the city. The Alameda location essentially has the same menu — a standard lineup of pancakes, Eggs Benedict variations, and lunchtime burgers, but with a full complement of fresh doughnuts added to the equation.

If you’re judging it strictly as a restaurant, Homeskillet is a bit of a work-in-progress. This is a casual, order-at-the-counter, pour-your-own-coffee kind of place. You order your breakfast at the doughnut display case, basically, which makes sense in the context of a doughnut shop. Still, it would help to iron out the logistics some. During the weekend brunch rush, customers kept doing an awkward double-take at the door, unsure of whether to snag a table, wait to be seated, or get in line.

As for Homeskillet’s hot breakfast dishes, the handful that I tried fell solidly into the serviceable-if-not-worth-going-out-of-your-way-for category. The hash browns were as well crisped as they were under-salted; the “seasonal berry” hotcakes would have been better if said berries were actually in season. The “California Love” breakfast sandwich (bacon, scrambled eggs, melted cheese, and avocado) needed something to give it extra oomph — a smear of garlicky aioli, maybe. My favorite dish, the Bird’s Nest, was a variation on ground beef hash: a mix of hash browns, melted cheese, Niman ranch ground beef, and runny-yolked fried eggs.

The main thing is this: The doughnuts are really good. Ma uses her father’s old recipes, but has updated the store’s repertoire with several “modern” flavors — a maple-bacon doughnut topped with actual pieces of candied bacon (a la San Francisco’s Dynamo Donut) that was sold out during my visits, and another with a glaze infused with the grassy bitterness of matcha green tea.

In the end, the more conventional doughnuts were the ones that won my heart. Even the chocolate-chocolate doughnut topped with rainbow sprinkles — ordered only to appease the small child in our party — wasn’t the sugar bomb I feared it would be. And while Homeskillet’s apple fritter wasn’t quite as outrageously oversized as the one at World’s Fare, I liked this version even better. It was plumped up with generous chunks of apple and made an audible crunch when I bit in to reveal the soft, fluffy interior. It was a doughnut worth savoring.