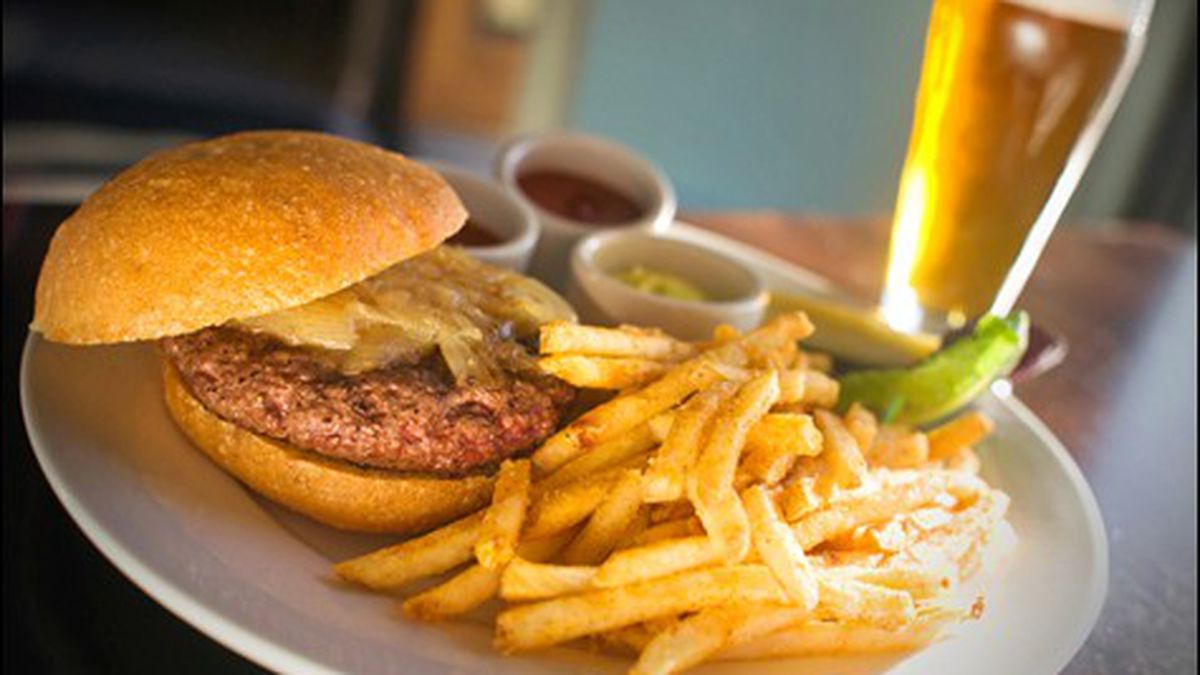 Around the World with Elevation 66

The El Cerrito brewery incorporates the flavors of Hawaii, Peru, Germany, Italy, and more — and pulls it off surprisingly well.

I confess I dragged my feet on visiting Elevation 66, the newish brewery and gastropub in El Cerrito, out of fear that I’d end up burdening the world with yet another restaurant review that declares, “This place is a bar. The food, shockingly, isn’t terrible.”

Because, despite the well-documented revival of pub grub as a genre here in the Bay Area, at the end of the day a grilled cheese sandwich made with artisanal bread and local cheeses is still a grilled cheese sandwich. French fries, however gussied up, rarely soar to the level of the sublime. And while it’s nice when a drinking establishment’s food is tasty, that alone isn’t especially newsworthy at this stage in the game.

Besides, a cursory glance at Elevation 66’s website revealed a sprawling menu that seemed scattershot and overly ambitious: Could a small family-friendly bar — whose chef’s background is Italian cooking — pull off a food program that crisscrosses the globe, taking detours to Hawaii, Korea, Peru, Argentina, and Germany?

The answer, it turns out, is yes. A little over a year after the brewery opened, and six months after it hired a new chef, Cindy Deetz (formerly of Berkeley’s Caffe Venezia), Elevation 66 is thriving — a packed house nearly every night. And the food, which is as skillfully prepared as it is eclectic, seems to be as big a draw as the impressive selection of craft beers.

Start your culinary tour in Hawaii, a cuisine that’s basically foreign to many of us here on the mainland. Elevation 66’s Kalua pork tacos — a holdover from the opening chef, who was a native of Hawaii — were some of the best non-traditional tacos I’ve eaten. The shredded pork, slowly braised overnight in banana leaves, was exceptionally tender and juicy — literally dripping with juice — and was topped with pickled red onions and a kind of orange kimchi slurry, for a bit of sourness and spice.

Next head to, where? Spain? Korea? The calamari was cut into thin strips, then grilled to smoky, tender perfection. Little dabs of green (avocado) and pink (grapefruit) purée dotted the plate, placing the restaurant squarely in the schmancy gastropub camp. And the accompanying arancini-like crispy rice fritters were spiked with Korean chili powder, making for a dish that, taken as a whole, evoked both bibimbap and seafood paella.

Then we were off to Germany (with nods to India) for a riff on currywurst: The house-made garlic-fennel sausages were slightly sweet — reminiscent of the kind sold by Taiwanese street vendors — and came to the table beautifully blistered. These were served over spaetzle and sauerkraut mixed with a curry-infused miso paste — an unlikely flavor combination that worked.

For dessert, we stayed in Italy — Deetz’s wheelhouse — for a rich chocolate budino: chocolate pudding, basically, but classed up with candied hazelnuts and Chantilly cream.

Over the course of two visits, there were only a couple of mild disappointments: The porcini mac ‘n’ cheese was a cast-iron-skilletful of saucy umami goodness, but deep-fried pickles didn’t make much sense as an accompaniment. And a cannellini spread, while tasty, was served with overly toasted rosemary crostini and lacked the oomph a dish containing Parmigiano-Reggiano, roasted garlic, and bacon (three of my four major food groups) ought to have had. But, really, there weren’t any clunkers.

Of course, Elevation 66 also serves the usual array of pub classics, all of them reinterpreted, or at least refined, as is the fashion now. The burger, pricey as it was ($14, fries included), had A-plus building blocks: a flavorful wagyu beef patty, caramelized onions, and a proper Acme pain de mie burger bun. It came with three condiments: ketchup, a house-made spicy tomato jam, and — best of all — a mustardy curry aioli. I mostly used these as dipping sauces for the fries, but about halfway through I decided to slather the aioli onto the patty itself. Burger traditionalist though I might be, I’d recommend you do the same.

We also enjoyed the fish ‘n’ chips, which were fairly traditional but as good a version as I’ve had in the East Bay — the beer batter impeccably crisp, the fish perfectly cooked. The house-made pickles, mostly cut-up cucumbers, were crunchy, sweet, and thoroughly refreshing — maybe the best deal on the menu at just $3 an order. And there’s always a grilled cheese “spontanee” option, made spontaneously (sort of) with whatever cheeses and other add-ons the kitchen staff has on hand.

Deetz changes the menu every couple of months in keeping with the seasons; in fact, it’s likely that she’ll have swapped out several dishes by the time this review goes to print, though a few standbys like the burger and the fish ‘n’ chips will always be available.

It probably goes without saying that the food all goes well with beer. I found the crisp, mildly hoppy house-brewed Contra Costa Kolsch especially nice.

Before I went, the only thing I’d heard about Elevation 66 was that it’s a kid-friendly bar — and it is that, with kid versions of several menu items available on request and a staff that’s willing to accommodate strollers and booster seats and the occasional tantrum. But more than that, it’s a place that aspires — with some success — to offer something for everyone: for adventurous eaters and timid ones, for biker dudes and tweens playing handheld video games while their parents finish dinner.

In the words of head brewer and co-owner David Goodstal: “The beauty and joy of this place is nobody owns it.”

Mostly, he said, it’s a place for local folks — but one where the food and drink can stand up to the scrutiny of out-of-towners, too.