.Annapurna in Old Oakland Is a New Go-To Spot for ‘Everyday’ Nepalese-Indian

The city's South Asian restaurant scene gets an upgrade. 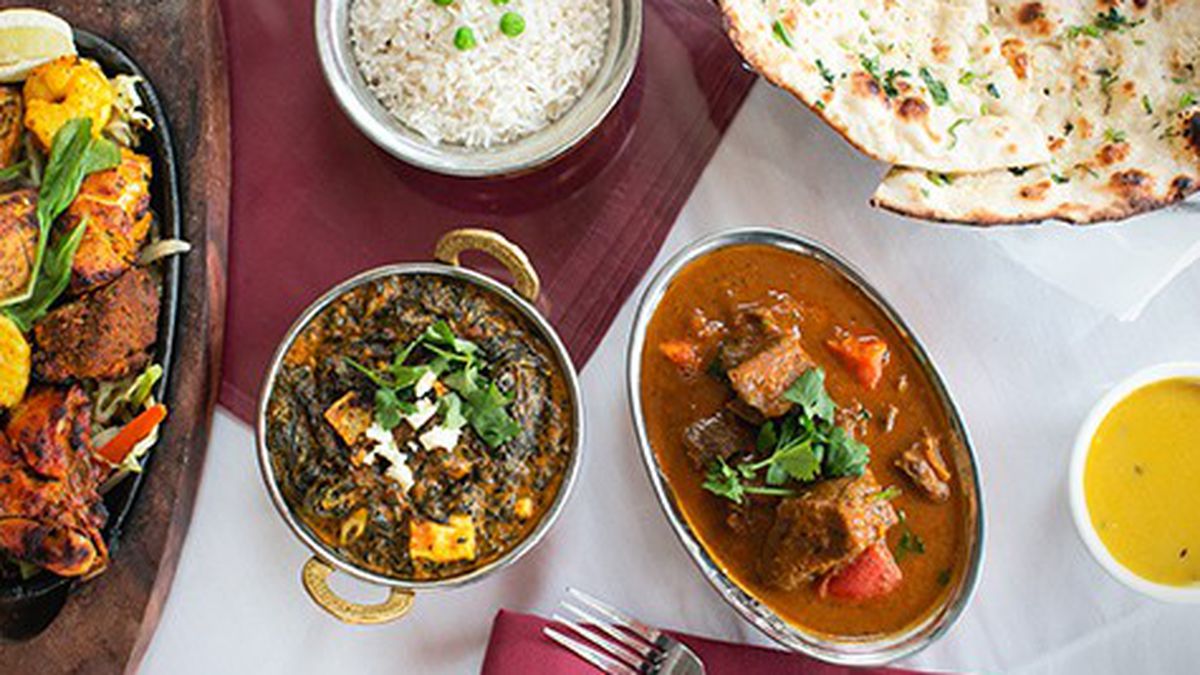 When a certain restaurant or neighborhood blows up, it tends to be extra obvious if a nearby business doesn’t benefit from that uptick in foot traffic. Like the last kid to get picked for the team in gym class, there’s something heartbreaking about the sad, empty Chinese takeout joint that sits directly across the street from, say, some trendy artisanal ice cream parlor with lines that wrap around the block.

That’s why I always felt bad for the old Clay Street location of Breads of India, which I must have passed by a few dozen times in the past two or three years, usually on my way to dinner at Miss Ollie’s or AS B-Dama. As the food hall at Swan’s Market has swelled in popularity, the fact that the rather spacious Indian restaurant right around the corner always seemed empty became more and more glaring. I’d feel bad — but never bad enough to change my dinner plans.

All this is to say: This was a restaurant that seemed like it could use a shakeup. So when new management took over in June and rebranded the place as a Nepalese-Indian restaurant called Annapurna (not to be confused with the Berkeley vape shop by the same name), I took note. While the dining room still isn’t exactly bursting at the seams with customers, my long-term forecast is bullish.

Putting aside the Nepalese aspect for just a moment, Annapurna represents something that The Town has been sorely lacking: a tolerably good everyday Indian restaurant.

That’s not to say that Oakland doesn’t have its share of high-quality Indian eateries, but not many — and none, really, that fall into that everyday curry-house category. Masala Cuisine happens to be one of my favorite places in the entire city, but it’s a schlep to get there if you don’t live in Deep East Oakland — and, anyway, the tiny restaurant resembles a home kitchen more than it does a traditional curry house. With its street stall-inspired pavs and farm-to-table sourcing, Temescal’s Juhu Beach Club is a one-of-a-kind place, but one I tend to save for nights when I’m going out out, not when I just want to grab a quick bite during my lunch break or veg out in front of the TV with a tub of curry and some naan.

Of course, Oakland has that more modest class of Indian restaurant, too. But thus far I have found the options to be fairly dismal, at least in comparison to the South Asian food readily available in Berkeley, for instance — to say nothing of the embarrassment of riches in cities like Fremont or Hayward.

I’m happy to inform you, then, that Annapurna might be my new go-to spot for when I get a hankering for such curry-house standards as chicken tikka masala. Here, the ubiquitous cream-based dish was a little bit less sweet, and the chicken a bit more succulent, than typical. Even better was the butter chicken, a similarly orange-hued dish that replaced breast meat with thigh meat and added a dollop of butter, which melted, luxuriously, into the sauce as we ate. Palak paneer can be a bland, tepid offering, but Annapurna’s version was particularly flavorful, and the paneer cheese tasted notably fresh and was cut into uncommonly large cubes — as generous a portion of paneer as I can recall getting in a dish.

This proved to be the theme of my meals at Annapurna: Every dish was a bit fresher-tasting and more vivid than what I’m accustomed to getting at Indian restaurants in Oakland. And portions tend to be large, which, along with the fact that entrées come with rice and a complimentary bowl of lentil soup, makes Annapurna a good value proposition, even if each individual dish costs $2 or $3 more than what you’d find at a more budget-oriented Indian restaurant.

All this, and I’ve yet to mention the Nepalese dishes! In fact, co-owners Pradip Raj Gotame (who manages the front of the house) and Bishnu Ghimire (the main chef) are both Nepalese, and the restaurant’s website boasts, specifically, about serving the “best Nepalese cuisine” in the East Bay. Generally speaking, though, this isn’t the kind of restaurant you should go to if you’re hoping for obscure Himalayan regional specialties. The menu doesn’t read as particularly Nepalese — which, as Gotame pointed out, is due to the fact that there’s so much overlap between Nepalese and Indian cuisines.

But the aforementioned lentil, or dal, soup is very much a Nepalese thing. Annapurna’s version is very good — a bit thin, perhaps, but still hearty and soul-warming. I never tried the restaurant’s lunch specials, but I gather they’re more or less an interpretation of dal-bhat-tarkari, the most typical Nepalese meal, which at Annapurna includes the soup, two curries, some raita, and rice.

Perhaps the most famous Himalayan dish is the momo, and Annapurna makes an excellent lamb version of these steamed-to-order dumplings. They burst with savory meat juices when we bit into them. (The restaurant also serves chicken and vegetarian momos, but both of these were comparatively bland.)

For the chhoila, another Nepalese specialty, marinated chicken or lamb was baked in the tandoor oven, then served cut into small pieces and mixed with sautéed bell pepper, onion, and thin strips of ginger, so that it ate as much like a Chinese stir-fry as it did a typical Indian tandoor dish. It was very good over basmati rice.

To mix things up, the menu also includes an insert that lists five or six specials that rotate monthly. The fish pakora — expertly fried and served with a mint chutney for dipping — was especially popular with the five-year-old in our party.

And I don’t know if there’s such a thing as “bad” naan — even run-of-the-mill versions tend to be pretty enjoyable — but the bread at Annapurna is exceptionally good. Normally I’m a sucker for anything that’s garlic or onion-studded, but the plain naan here was a thing of beauty. Golden-brown on both sides and generously butter-brushed, it offered just the right balance of crunch and chew.

Annapurna is a good “everyday” Nepalese-Indian restaurant and a worthy takeout destination, but that’s not to say you shouldn’t visit in person. In fact, it might be the most visually striking restaurant in Old Oakland. With its high, raftered ceiling; ornate chandelier; and formal, wood-carved dining chairs, the restaurant looks more like an old-fashioned beer hall or a mountain chateau than it does a typical Indian restaurant. (Apparently, the Breads of India owner had designed the interior as a nod to India’s early 20th century Raj era.)

It was a sumptuous setting in which to eat what turned out to be my favorite dish by far — a velvety rogan josh-style goat curry that served as proof that this kitchen is willing and able to serve food “Indian spicy” if you request it. (The dishes I ordered “medium,” on the other hand, had almost no heat.)

On one of the hottest nights of our late-arriving Bay Area summer, I wound up drenched in sweat as I gnawed that goat off the bone. It was probably the spiciest thing I’ve eaten this year, with chunks of juicy grilled tomato to provide momentary relief — a sweet, exquisite pleasure.