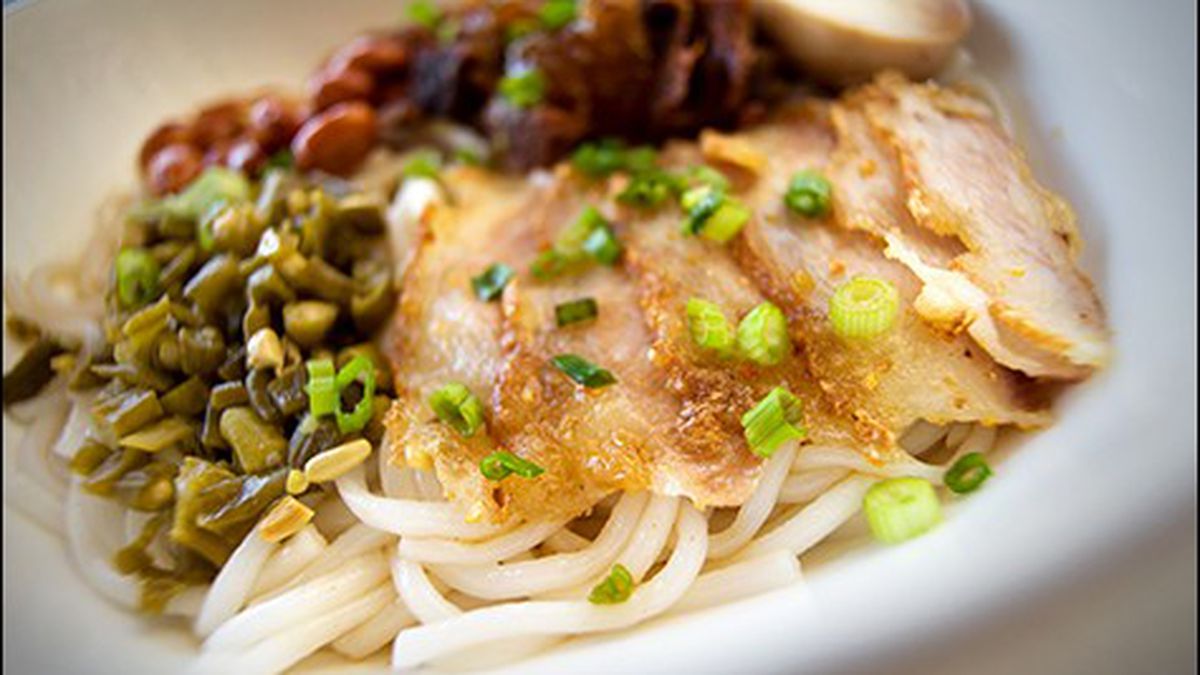 The restaurants in Oakland’s Chinatown have many virtues — low prices, food as tasty as it is unfussy, and a surprising lack of obnoxious tourists and hipsters, just to name three. What Oakland has not been, for the most part, is a destination for fanciers of lesser-known Chinese regional cuisines. With a few exceptions, Cantonese food — the food of China’s Guangdong province and Hong Kong — tends to dominate, as it does much of this country’s non-Panda Express Chinese restaurant scene.

That has been changing, though. Now the cuisines of Sichuan, Shanghai, Shangdong, and Tianjin are represented in Chinatown. Perhaps the most exciting addition is a new restaurant called Classic Guilin Rice Noodles, which specializes in a dish — those titular rice noodles — you won’t find at more than a handful of restaurants in the entire United States.

Some background: Guilin is a southern Chinese city in Guangxi that’s known for its scenery. The region isn’t especially famous for its food, but Guilin rice noodles are the one dish that’s known throughout China. (In fact, Classic Guilin Rice Noodles owner Nana Liu said her restaurant is actually a franchise of a small chain that has locations in Guangxi, Shanghai, and Nanyang.) The dish — a deceptively simple combination of noodles, meat, pickled vegetables, and broth — is said to date back some 2,000 years.

But here in the United States, it’s almost completely obscure. Liu said that, as a Guilin native, she’d craved this hometown specialty ever since she immigrated to the States in 2007. When she decided to open her own place, Oakland — with its diverse Chinese population and reputation for attracting people open to trying new foods — seemed like the perfect place to do it.

Classic Guilin Rice Noodles is a bright and modern-looking restaurant, set up like the kind of chic urban cafe you’d find in Taipei or Hong Kong. There’s a large, backlit picture-menu and a flat-screen TV that shows a continuous loop of Guilin scenery footage. During my visits, nearly everyone there was speaking Mandarin or Cantonese.

The dominant feature of the menu is the rice noodles, which vary according to what kind of meat you’d like them to be topped with: barbecue pork, crispy pork, salty beef, beef tripe, or beef brisket. You pay $5.50 for a bowl with a single meat selection, or a dollar more for any combination of two. For the hungry and indecisive, a mere $8.50 will buy you a kind of sampler platter — five small bowls, each one topped with a different meat.

Each standard bowl had the same setup: First, there was a generous portion of white rice noodles — round, slippery, spaghetti-like strands. Then there was the meat, of which I favored the tender chunks of beef brisket and the crispy pork, whose edges had a surprisingly big crunch. The “salty beef” was less memorable, but it also wasn’t as salty as you might fear.

Rounding out each bowl were chopped scallions, roasted peanuts, minced raw garlic, half a braised soy sauce egg, and — most intriguingly — pieces of pickled longbean, which were fermented in-house. The only sauce was a small quantity of dark, soy-sauce-like liquid, made by simmering Chinese medicinal herbs, five-spice powder, and plenty of salt.

Toppings aside, this is a fairly mild-flavored bowl of noodles, but for those who like their food more aggressively seasoned, there’s extra sauce available on every table, in addition to two house-made chili pastes. One was spiked with fermented black beans and garlic — very aromatic and seriously spicy — while the other seemed to consist entirely of red chili seeds.

Finally, you’re presented with a bowl of cloudy, very plain beef broth, which my server instructed me to drink as an accompaniment or to pour into the bowl after I’d finished eating the toppings, so the remaining noodles could be eaten in a soup. Even though the broth had barely been seasoned, it had a kind of richness that comes from long simmered bones; it worked nicely as a meaty palate cleanser.

Though the rice noodles are the main attraction at Classic Guilin Rice Noodles, there are other interesting specialties available: Liuzhou spicy snail rice noodle soup, a specialty of another city in Guangxi, featured not actual pieces of snail, but a spicy, slightly gamey broth; thinner, softer, more easily slurpable rice noodles; and an assortment of variously textured toppings (including pickled bamboo shoots and fried gluten puffs).

A lotus leaf rice wrap with spareribs and salty fermented black beans was like a less-sticky, jumbo-size version of the popular dim sum item. An order of chicken feet (which were served cold, crunchy, and slightly pickled) was interesting and unusual, even if it wasn’t something I’d necessarily recommend. For a beverage, try the grain soy milk, which had the thick texture and nuttiness of a peanut punch.

David Pistrang, a content manager at Chow.com, spent several months living not far from Guilin and wrote his master’s thesis on the local cuisine, so I asked him to join me for one of my visits to Classic Guilin Rice Noodles. He said the restaurant’s version of Guilin rice noodles was on par with what he found in China, though the street vendors that he frequented served the noodles in the soup. As Pistrang wrote in the Chowhound post that had tipped me off to the restaurant, he was glad to become reacquainted with a familiar “taste sensation that [he] hadn’t experienced” since he left.

For me, it was the first time I’d eaten these ingredients together, and yet the combination — the crunch of the aromatic peanuts, the slight bite of the garlic, the pickly note from the longbeans — conveyed a sense of inevitability. Maybe that’s what makes the dish a “classic.” I know I’m already looking forward to going back for another bowl.