But death rate remains unchanged, suggesting more testing could be behind surge 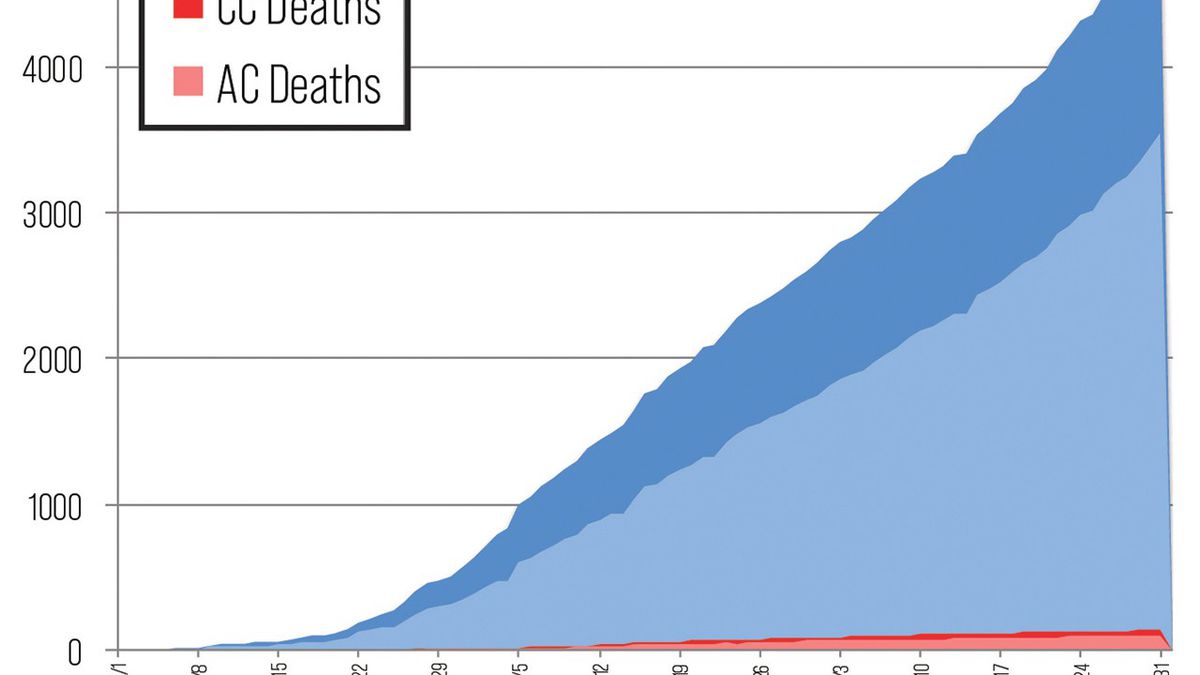 A recent surge in new Covid-19 cases in Alameda County has pushed the overall number of total East Bay cases to right around 5,000.

During the past two weeks, the rate of growth in new cases has begun to climb, and Alameda County crested 3,000 cases a week ago. But the surge in cases is possibly due to increased testing in Oakland, where a third site was recently opened. Over the past week, the number of new cases in Oakland rose considerably.

Despite the increase in cases, the number of deaths attributed to Covid-19—a metric not variable depending upon the rate of testing—has remained steady. Roughly 12 people per week in the East Bay have died of Covid-19 over the past month, with little change from week to week.

Hayward and the unincorporated areas of Alameda County continue to show high rates of infections. After Oakland’s 1,229 cases, Hayward had the second-most Covid-19 cases in the county at 653 as of Monday. But its rate of 405.5 cases per 100,000 residents was the highest in the county, followed by nearby unincorporated Eden area, with a rate of 322.5 cases per 100,000 residents.

Latinos in Alameda County continue to have the most Covid-19 cases, making up about 1,400 of the total cases. Notably, some of the county’s largest Latino communities reside in Hayward and the unincorporated areas. However, the rate of African Americans in the county who have died from complications due to Covid-19, remains the highest among all demographics. The county’s death rate for African Americans is roughly twice as high as the death rate for people of all races.

Alameda County’s spike in cases is part of a larger trend. The San Francisco Chronicle reported that “seven of the nine Bay Area counties have reported recent, significant upticks in cases, and the Bay Area as a whole recorded a nearly 40 percent jump in new cases last week over the week before.”

According to a statistical model created by the Center for Disease Control, Alameda County will have 164 Covid-19 deaths by Sept. 1, the East Bay Times reported. As of Sunday, the county has suffered 103 deaths, including Berkeley, which has its own health department.

A week after reports that the notoriously penurious Oakland A’s ownership will not pay its $1.2 million rent at the Coliseum comes news the team also will stop making weekly $400 payments to its minor league players.

The Associated Press reported that Oakland A’s management announced that the team would stop paying their minor league players’ stipends, while also moving to furlough team employees and cut salaries for executives. ESPN’s Jeff Passan tweeted the tidbit last week, citing unnamed sources. A back-of-the-napkin estimate of how much it costs the A’s to pay players in their farm system is about $1 million, according to Passan.

Meanwhile, The Athletic reported that full-time A’s employees earning more than $60,000 a year will receive pay cuts or be furloughed beginning on June 1.

A’s owner John Fisher is one of the richest in Major League Baseball. But the son of Gap Inc. founder Donald Fisher faces heavy exposure to financial distress as the popular retail clothing store continues to lose money. In April, The Gap announced it would stop paying rent at all of its retail locations. Around the same time, the A’s notified the Oakland Coliseum Joint Powers Authority that it would not be making its rent payment this year because of Covid-19.

A fairly recent change in how Major League Baseball compensates small-market franchises like the A’s has pinched its bottom line. The team is no longer able to subsidize its small payroll with annual payments from other owners. The loss of the subsidies is one reason why the A’s have sought in recent years to build a privately-financed waterfront ballpark at Howard Terminal in Oakland in order to create new revenues for the franchise.

An estimated $17 million budget shortfall in Hayward has induced yet another bargaining unit to agree to cost-saving cuts. This time, the Hayward Police Management Unit, which represents the department’s three police captains, has agreed to 80-hour unpaid furloughs for the upcoming fiscal year.

The cost savings to the city is $37,056. The concession comes on the heels of a number of agreements by city administrators, the city council, and firefighters, to lower the city’s ballooning expenditures in the face of quickly evaporating revenues due to the pandemic.

The Hayward City Council was to discuss the furloughs at Tuesday night’s meeting.

Two firefighter unions agreed last week to defer upcoming two-percent cost-of-living increases to the end of their current contracts. The move saves the city $450,000. Hayward elected officials agreed to cut their salaries by two percent, while the city manager and her executive team also agreed to forego two percent cost-of-living increases. In total, the savings is an additional $18,000.

A flurry of additional concessions could also be on the horizon. The Hayward City Council has met in closed session negotiations with several of its bargaining units recently, and with more to come this week.

Detailed data released by Santa Clara County shows that more than half of the people dying from Covid-19 suffered from underlying health problems such as high blood pressure. Forty percent had diabetes. Statistics about the county’s first 139 confirmed Covid-19 casualties offered the Bay Area’s most detailed picture to date of who’s dying from the virus and how. Although patients’ lungs are ground zero, the disease can ravage a whole host of organs—the heart, kidneys, gut and brain. Aside from pneumonia and acute pulmonary distress, other common fatal complications in the scores of local cases included renal failure and heart attack. Other prevalent pre-existing conditions included congestive heart failure, kidney disease and clogged arteries.

The coronavirus began spreading in the Bay Area sometime in late January and early February, according to a new report, the Chronicle reported. … A Covid-19 outbreak infected 12 employees at the Cardenas Markets on Fruitvale Avenue in Oakland, the East Bay Times reported. … Workers at the Oakland McDonald’s where at least 12 employees were infected with coronavirus, filed a complaint with the Alameda County Public Health Department, SF Eater reported. The complaint alleges the employees had worked while being sick since May 14. Twenty-two employees at the restaurant went on strike Tuesday, the Times reported. …

BART’s effort to instill confidence in the transit system during the pandemic includes new social distancing rules on trains, SFGate reported. “BART will run long trains throughout the day to allow riders to spread out. Transit officials say that with no more than 30 people in a car, physical distancing of 6 feet can be preserved. With 60 people in a car, a 3-foot distance can be maintained.” …

Alameda County will reopen its traffic court for in-person cases starting June 16, the East Bay Times reported. The county courts will begin some business remotely beginning on June 1. … El Dorado County, which includes Lake Tahoe, removed its Covid-19 travel ban, the Chronicle reported. But that doesn’t mean it wants travelers to visit just yet. … In most parts of the state, hair salons and barbershops can begin reopening, but not in the Bay Area, including Alameda and Contra Costa Counties, ABC7 reported. While much of the state moves toward Stage 3 reopening, places like Alameda County have only recently entered Stage 2.

Oakland Mayor Libby Schaaf was tested for Covid-19 last week after having a sore throat, she told KCBS. The test came back negative. … The pastor at Word Assembly Church in Oakland spent 10 days on a ventilator after contracting Covid-19, KTVU reported. The experience led him to discourage other churches from opening before it is safe. … Gov. Gavin Newsom released new guidelines for how places of worship can reopen, SFGate reported. Attendance will be limited 25 percent of capacity and a maximum of 100 people, with no singing. No date for the reopening was given, but expect the East Bay to be among the last places to put the guidelines into effect.

Contra Costa County supervisors extended their eviction moratorium to July 15 on Tuesday, the Times reported. The revised ordinance, however, no longer allows large businesses to defer rent payments. Alameda County was expected to revisit its eviction moratorium on June 2. …

Covid-19 has fundamentally changed the calculus on many things over the past two months, including the November ballot measure to reform Proposition 13. “But the financial damage brought on by the disease is transforming the fight over a measure that would raise property taxes for many businesses into a struggle over the future of California,” Joe Garofoli wrote in the Chron. …

Oakland’s Clorox is booming during the pandemic, the Chron reported. Demand for its cleaning products has skyrocketed since March. Sales of some products are up by 500 percent.

Jennifer Wadsworth contributed
to this report.

Next ArticleWednesday’s Briefing: Three Oakland councilmembers call on OPD to discontinue use of tear gas on protesters; Hostage situation in Oakland