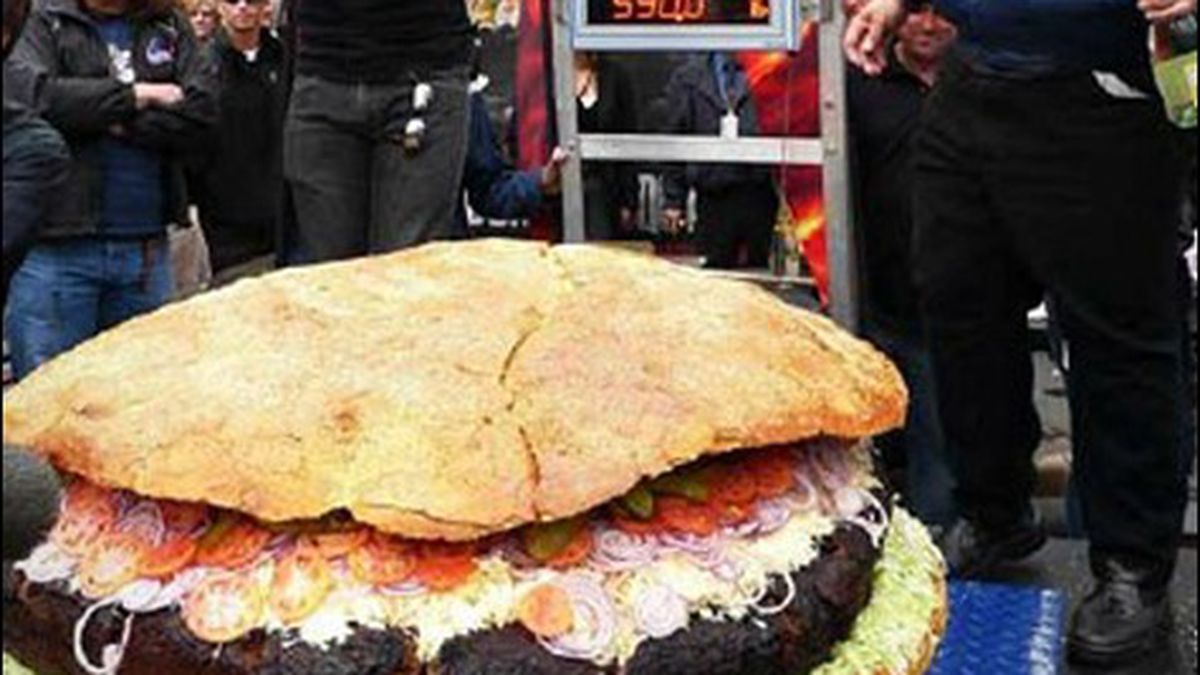 A giant hamburger could tip scales and shatter records.

Imagine a world with hamburgers the size of recliners, their patties and buns so bountiful they could sustain one person for months. This meat lover’s fantasy becomes a reality on Saturday, July 2, at the Alameda County Fair (4501 Pleasanton Ave., Pleasanton), when a ten-person crew attempts to set a new record for the world’s largest hamburger.

The current Guinness World Record for “largest hamburger commercially available,” weighing in at 590 pounds, was set in Canada in 2010. But Nick Nicora, co-owner and vice president of business development at Ovations Food Services, which oversees all food-related festivities at the Pleasanton fair, makes no buns (cheesy pun intended) about his plans to shatter that record with a whopping burger that exceeds 600 pounds in meat alone. That’s a lot to digest when you add an estimated 110-pound bun, more than twenty pounds of onions, thirty pounds of lettuce, twelve pounds of pickles, and pounds and pounds of condiments. “We are extremely confident that we will surpass the 590-pound weight,” he said.

Nicora, the brains behind the burger, has already officiated his proposal with Guinness World Records, a prerequisite for any legitimate record-breaking hopeful. “Breaking the record is actually easier than getting it approved,” he said. The whole process must be filmed for official review with certified witnesses on site for good measure. To help secure his burger’s place in the history books, Nicora has lined up representatives from Future Farmers of America and the California Department of Food and Agriculture to ensure that the hefty endeavor adheres to food safety standards, and to verify the accuracy of the giant scale required for weighing the results.

And then there are the logistics involved with cooking so much meat and dough. With help from burgermeister Brett Enright (who has not only cooked his own roughly 400-pound burger, but is the owner of Juicys Outlaw Grill, a mobile barbecue that’s purportedly the world’s largest), Nicora secured a grill large enough to cook over half a ton of Harris Ranch beef. He commissioned Fresno-based Athens Bakery to bake a set of hamburger buns two feet thick and four feet in diameter, which bakery owner Dave Smart said will have to be loaded by forklift into a trailer to be delivered to the fairgrounds for assembly.

Nicora and his team will begin preparing the massive meat concoction at 5 a.m. the morning of their world-record attempt, and finally weigh and serve up the finished product by 5:30 p.m. “It’s going to take a forklift to get the burger off the barbecue,” he said. But beyond the hankering for worldwide recognition is a more humanitarian motive: fairgoers can purchase portions of the burger for 99 cents a bite (a nod to the fair’s 99th year), with proceeds going to the Alameda County Community Food Bank. There is a strict four-hour period in which the burger can safely be served to the public, but Nicora said he anticipates selling a few thousand pieces.

“I consider hamburgers America’s food,” he said. “It is what we grew up on — it’s what we do, it’s part of life. And I can tell you I’ve eaten my fair share of burgers in my lifetime, but never one this big.” Curious or just plain hungry fair attendees can witness the record-setting attempt when the fair opens at 10 a.m. $6-$10, under 6 free. 925-426-7600 or AlamedaCountyFair.com

We’re Hardwired to be Good