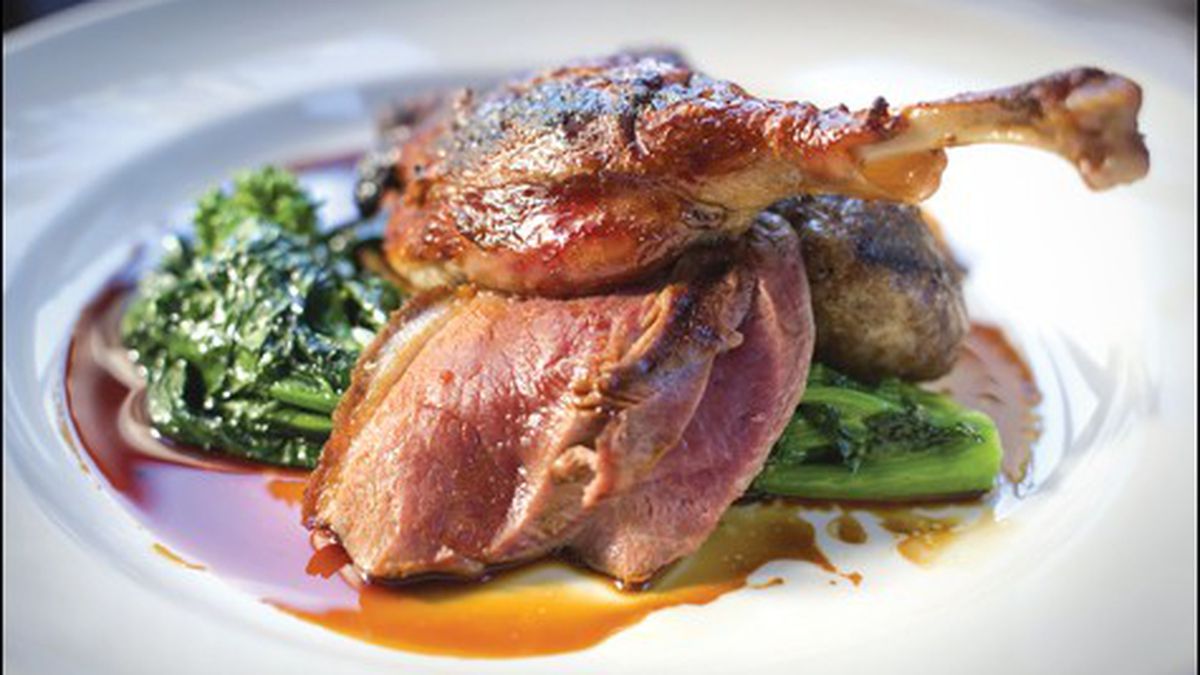 The Oakland restaurant's California cuisine remains as enticing as ever.

We all know that Oakland is the new culinary capital of the universe (did you catch the New York Times‘ rather late-to-the-party feature piece on the Oaktown Renaissance a few weeks ago?), with another highly trumpeted, critically acclaimed, or hipster-anointed eatery opening every week or so. But the city’s reputation for good eating stretches back through the decades, with an impressive lineup of standard-bearers who established the city as a viable foodie Mecca in the first place. To wit: Bay Wolf, which opened its doors 35 years ago and remains one of the Bay Area’s premier dining venues. Founding owner Michael Wild envisioned a restaurant that would celebrate the rich and varied regions of the Mediterranean, an area similar to Northern California in climate, temperament, and raw ingredients. To that end, he and partners Larry Goldman and Michael Phelps reconfigured a roomy old Craftsman home into a restaurant with two dining rooms and an enclosed veranda. Their concept — serving the fresh, rustic dishes of France, Spain, and Italy in the deceptively simple style of fellow East Bay-er Alice Waters — has been imitated often in the succeeding decades, but still works wonderfully well.

Tucked along well-heeled Piedmont Avenue among other tastebud-friendly hangouts like César and Gregoire (Commis is right next door), Bay Wolf has what you might call the retro-residential look, with a gabled façade, a broad veranda, and a serene front-parlor. To the right of the standup bar at the entrance is a homey, earth-tone dining room with tactile Art Nouveau wallpaper and big copper-crystal chandeliers. The dining room on the left is wrapped in the cooler, more modern look of primary colors. In both venues, the vibe is festive and friendly despite the restaurant’s high-end rep and stipend.

The cooks are famous for the delicious things they do with organically raised ducks from Sonoma’s Liberty Farms, and we kicked off our meal with duck liver prepared two different ways. Bay Wolf’s duck liver flan is a classic — a lighter, more delicate variation on pâté, but with all the organ’s rich, gamy flavor intact. It’s served with piquant little cornichons for contrast and rounds of freshly grilled Acme sourdough. The pan-seared duck liver was even better: Its luscious, beefy essence was accented with the salty-sweet flavor of pancetta-wrapped Black Mission figs, a drizzle of pungent Balsamic vinegar, and the fresh, slightly bitter taste of braised spinach — a complex dish that came together beautifully. A third starter, chicken salad, was a respectable toss-up of fresh, seasonal sweet corn and bits of tomato; moist smoked breast meat; and creamy, inoffensive blue cheese dressing, but it wasn’t especially memorable.

There was more duck for the scarfing at entrée time, with a platter of Anatidae prepared three ways: its breast grilled until perfectly rare and fork-tender, its leg meat smoked and pulled from the bone, and the rest ground into a rich, spicy sausage patty. Served with grilled peaches, a subtle honey-lavender sauce, and pungent braised rapini (plus a soggy, easily avoidable corn cake), it was worthy of its tasty headliner. The grilled ling cod wasn’t as successful, just a slab of bland fish wrapped in a fig leaf and served with (really good) grilled summer squash. The grilled scallops fared better: plump, tender, and slightly sweet, they were accompanied by a Provençal tian of squash, peppers, and onions and a snarky saffron-tomato vinaigrette that nicely accented the mollusks’ rich flavor. Another summery dish, house-made lemon-scented pasta strewn with sweet peppers, blistered cherry tomatoes, and juicy, smoky shrimp hot from the griddle, was a light, lovely treat. Most impressive, though, was the roasted rack of pork, a huge strip of tender, juicy pigmeat with an edge of peppers and cumin that gave it a spicy Southwestern glow. Luscious, vinegary Romano beans made a marvelous accompaniment.

There are generally enough meat-free items on Bay Wolf’s ever-changing menu to accommodate the vegetarians in your party. Starters might include roasted corn chowder or a salad of hazelnut-crusted goat cheese, nectarines, and arugula. There’s usually a vegetarian pasta dish like ricotta-stuffed ravioli with spinach and mushrooms among the entrées, and you can fill up on side dishes like rapini, corn on the cob with pasilla butter, the vegetable tian, or lemon-scented mashed potatoes.

The well-selected wine list highlights several small-production vineyards, mostly out of France and California with a dozen or so Italians and the occasional Willamette Valley pinot thrown in. (The fourteen by-the-glass selections are on the undistinguished side, though.) Bottle prices range from $25 (a Domaine des Baumard chenin blanc) to $325 (Araujo‘s 1999 Napa Valley cab) with several stops in between, so you can make the evening as classy as you please. Beers include Brother Thelonius Abbey Ale and Green Flash‘s extra-hoppy Hop Head Red, and the wine bar mixes up a selection of pretty good quasi-cocktails: a sweet, fragrant mojito brimming with fresh mint and touched with Aqua Perfecta pear liqueur; a light, refreshing Lillet-based lemon drop sweetened with crushed berries; and (best of all) the Ginger Portini, a silky smooth concoction of white port and fresh ginger with a creditable punch.

Dessert was our favorite part of the meal. One dish featured three delicate cornmeal crepes served with ripe, juicy roasted peaches and a scoop of ice cream flavored with brandy and bitter almonds. Another, chocolate soufflé cake, was unaccountably light on the palate despite its moist, dense texture and darkly hallucinogenic flavor. But the champion meal-closer was the summer berry pudding. It transcended the traditional bread pudding by extracting all the ripe essence of raspberries, blackberries, and blueberries and pressing them into a molded cake, resulting in very little starchy filler and lots of bright, sweet juice, seed, and flesh. Served with a dollop of Chantilly cream, it captured the tongue-pleasing, belly-filling soul of the season and the surrounding countryside, just as Bay Wolf has been doing for lo these many decades. &#8;