An August 3 march and rally marking the one-year anniversary of the Chevron fire also aims to raise awareness about proposals they believe will increase the refinery of tar sands oil in the Bay Area. 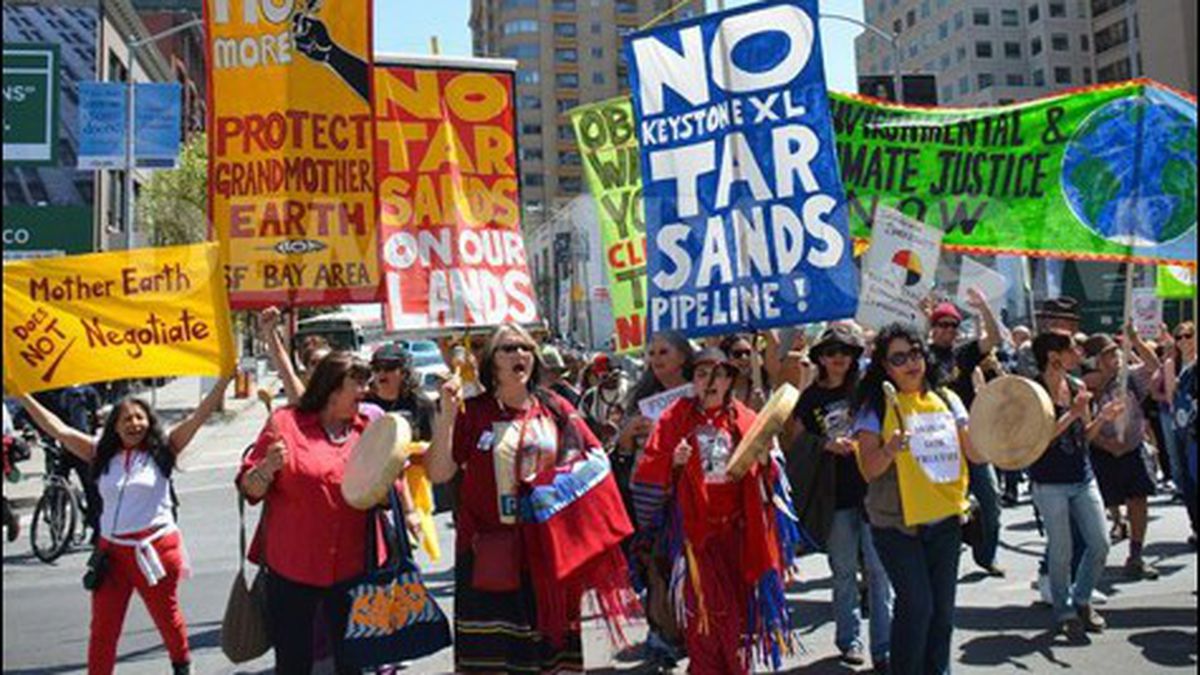 One year ago, an explosion at the Chevron refinery in Richmond sent a plume of black smoke into the air and more than 15,000 people to local hospitals. Now, as the city still tries to assess the total damages from the incident, new concerns have erupted that the refinery and others in the Bay Area may start processing significant amounts of tar sands oil.

To bring attention to these concerns, a major march and rally is scheduled for August 3, beginning at Richmond BART and ending at the Chevron refinery. The mobilization not only marks the one-year anniversary of the fire but will also serve as California’s main event in the national Summer Heat campaign, which is being organized by 350.org to oppose the Keystone XL pipeline. 350.org is a grassroots movement — founded by respected environmentalist Bill McKibben, who will speak at the August 3 protest — that aims to fight climate change. The Keystone XL pipeline, which will bring large amounts of oil from Canadian tar sands, will impact global warming by worsening carbon pollution. “Summer Heat” calls on participants to “stand up to the [fossil fuel] industry that is wrecking our future.”

“We feel everything is connected,” said Sandy Saeteurn of the Richmond branch of the Asian Pacific Environmental Network. “Coalition-building is needed to win systemic change.” Other groups involved include the Richmond Progressive Alliance, Communities for a Better Environment, Gathering Tribes, and Urban Tilth, among others.

Activists fear that the Bay Area will soon become a major processor of tar sands oil. Industry analysts at the Natural Resources Defense Council believe that several proposed projects, including a rail terminal at the Valero refinery in Benicia and an upgrade at Chevron, will lead to the processing of “significant amounts of tar sands oil,” according to Diane Bailey, a senior scientist at the Natural Resources Defense Council.

And Brent Olson, local campaign manager for the National Resources Defense Council, said other projects — including rail terminals proposed by Phillips 66 and Tesoro, as well as plans by independent shipping company NuStar for a terminal that would ship crude oil to refineries by barge — also point to the likelihood of tar sands oil coming to the Bay Area.

However, spokespeople for both Valero and Chevron deny that they have any plans to process oil from tar sands. And Chevron spokeswoman Melissa Ritchie said the upgrade will just make the refinery cleaner and safer, with “zero net greenhouse gas emissions.”

Lower-quality crude, such as the oil from tar sands, worsens climate change because processing it requires burning more fuel than normal crude oil. It also worsens pollution because it contains more toxic metals and chemicals, and it is more corrosive to refinery equipment, according to the Bay Area Air Quality Management District. Corrosion of pipes was the cause of last year’s Chevron refinery fire.

Protesters are calling for an end to hazardous conditions at the refinery, a ban on processing “dirty crude,” a rejection of the Keystone XL pipeline, a transition to clean energy with union jobs, and an end to corporate tax evasion and “polluting democracy” with political spending. Organizer and Richmond resident Andres Soto said the event was initially “started solely as a local initiative to commemorate the one-year anniversary of the fire,” but “when the 350 people got involved, it mushroomed.” 350 Bay Area has joined with environmental justice groups in previous actions and is also a member of the Richmond Environmental Justice Coalition.

Besides environmental and community groups, a number of union locals and the district councils of the American Federation of State, County, and Municipal Employees and Communications Workers of America have signed on as sponsors of the August 3 action. “Many of the unions have members who live in Richmond or members who have environmental health issues on their jobs,” said Brooke Anderson, who is organizing the labor contingent for the march. In addition, she said, corporate forces supporting the fossil-fuel industry, such as the Koch brothers, “are the same ones that are leading attacks on workers’ rights.”

Refinery workers have sometimes viewed protests at Chevron as threats to their jobs. So after the fire, the UC Berkeley Labor and Occupational Health Program invited union and community leaders to sit down together, which led to the creation of the Coalition on Refinery Safety. “Our main goal was to join forces to build a stronger voice, not only for refinery safety but for community safety, for the communities around the refineries — not just Chevron, but all the refineries,” said Mike Smith, health and safety chair of United Steelworkers Local 5, which represents Chevron’s workers.

In Benicia, United Steelworkers Local 675 joined environmental groups in signing a letter demanding a full environmental review of Valero’s plan to build a rail terminal, expressing concerns about potential air quality, health, and safety impacts. However, unions representing the building trades have been absent from these coalitions, and Local 180 of the International Brotherhood of Electrical Workers signed a letter of support for the Valero project.

Local 5 stopped short of endorsing the August 3 march. Members aren’t ready to support a “cap” on the quality of crude oil refined at the plant, Smith explained. “We understand that could hurt our jobs.” But the local did approve a letter from the Coalition on Refinery Safety asking the Bay Area Air Quality Management District to require refineries, before they bring in low-quality crude, to “demonstrate that they can run it safely, without any added threat” to worker or community health and safety, Smith said. The air management district is now in the process of creating regulations on refinery emissions, however, the coalition says its proposed rules are much too weak.

Benicia residents packed a planning commission meeting on July 11 to push for a full environmental impact review of the Valero refinery’s train-terminal proposal. Reeling from the recent derailment of a train carrying crude oil in Canada, which killed more than forty people, Benicia resident Marilyn Bardet said, “I realized this whole nightmare would funnel right into my town every day” if the rail terminal is built.

The prospect of the Bay Area becoming a major refiner of tar sands oil and the ongoing struggle against Chevron’s pollution have members of the Summer Heat Richmond coalition busy planning their efforts beyond August 3. On August 6, the actual anniversary of the fire, a memorial ceremony starting at 6 p.m. at the Richmond Civic Center will honor people sickened by the toxic emissions released in the accident.

Other plans include a conference on “education and community-building” and more protests in the fall. Strengthening and broadening the coalition is essential, said 350 Bay Area activist Koteen. “Working in a collaborative manner is the only way we can build an effective movement.”