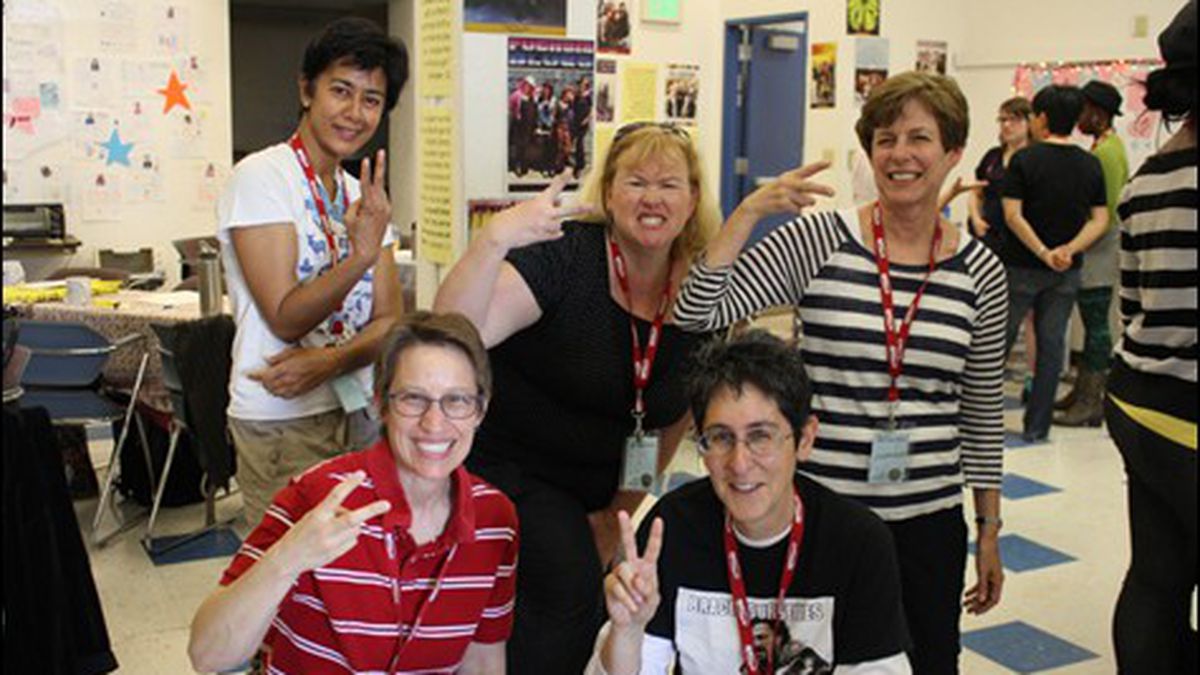 Two and a half years ago, at age 33, I started playing drums. I joined a rock band, recorded an EP, and went on tour. Although I’ve been writing about music my entire adult life, there were a few things about being in a band that surprised me, like how gigs involve a lot of hurrying up and waiting (to play to three people), how little you get paid (if at all), and how excited crowds are outside of the Bay Area. But, as a woman, there was a whole other set of issues I wasn’t prepared to deal with:

To begin with, no one expected me to be the drummer, or to even be in the band. And no one expected me to be any good. Because I was halfway decent (and that’s being generous), some people thought I was amazing — perhaps only because they didn’t think I’d be able to play in the first place. Also, male groupies. And on several occasions, I had to deal with guys who felt the need to prove that they were better musicians than me, and (without prompting) “teach” me how to play/set up/tune my instrument. Egos were insane.

Which is why it was beyond refreshing to step into the fun, supportive, nonjudgmental environment of Women’s Rock Camp last Friday, held at Oakland’s Malonga Casquelourd Center for the Arts, where a diverse group of 35 women had committed themselves to a weekend of rocking out. While some had attended prior Women’s Rock Camps, most had little to no experience playing an instrument. And yet, by the end of the weekend, they would learn to play an instrument, form bands with strangers, write one song, and perform it onstage at The New Parish.

To facilitate the process, ground rules were established: When someone says, “I’m sorry,” say, “No, you rock!” You don’t have to do anything you don’t want to. Assume everyone has the best intentions. If you’re usually quiet, speak up more, and vice versa.

There was a buddy system so that everyone had someone to support — and receive support from. Butcher paper on the wall allowed participants to write anonymous “shout-outs” about each other, praising any particular skill or positive attribute. Band coaches were on hand to act as problem-solvers and cheerleaders.

In other words, it was the exact opposite of my real-world rock ‘n’ roll experience. Why couldn’t all bands operate like this?

Actually, the whole point of Women’s Rock Camp is to be supportive. When it started five years ago (as Ladies Rock Camp), it was simply a fundraiser for Bay Area Girls Rock Camp, a nonprofit that aims to empower girls ages eight to eighteen through music. The organization spawned from the original Rock ‘n’ Roll Camp for Girls in Portland, Oregon, and is part of the Girls Rock Camp Alliance, which now includes 43 girls’ rock camps all over the world. Gabby Miller, program and outreach coordinator of Bay Area Girls Rock Camp, said that soon after launching the three-day adult version of their kids’ camp, they realized that the things they were teaching young girls were just as important for women. “Women are used to not making mistakes,” said Miller. At rock camp, however, “you make a bunch of mistakes, and don’t feel bad about it. It’s also about amplifying your voice.” Adults, she continued, “still need a lot of encouragement.” While Women’s Rock Camp still acts primarily a fundraiser, it’s now on a sliding scale ($300 to $500), and sponsored spots are available.

Cynthia Rice, 58, said she first joined Women’s Rock Camp two years ago because she had always wanted to play guitar. She learned one chord, and came back this year to learn more. Though the legal aid lawyer, who lives in Albany, said the experience was scary at first, ultimately, she said, it was “both humbling and liberating. It’s a skill you have to work at, but you can do it,” she said. “It was tremendous.”

While many women expressed similar feelings of personal empowerment, there was also a collective sense of accomplishment. “It doesn’t seem to be safe to be a girl or a woman in the world,” said participant Yolanda Simmons, 51, explaining why she thinks Women’s Rock Camp is necessary. “There’s also a lot of women hating on women.” Rock camp, she said, is “just about the music. It’s a safe environment for women.”

The weekend also went beyond learning to play music. A workshop on media literacy, led by San Francisco State women and gender studies professor Jillian Sandell, dissected videos by Madonna and Missy Elliott and discussed issues of cultural appropriation and privilege. There was also a workshop on screen-printing.

By 3 p.m. on Saturday, many of the participants seemed exhausted from all the activities. By then they had learned their instruments, formed their bands, and were in the midst of writing songs. That’s a difficult-enough task for any musician, let alone one that’s just learned how to play. Some had generated ideas from a songwriting workshop, while others strung together the few chords or beats they had learned during instrument instruction. Downstairs in the basement-level classrooms, the bands — each consisting of a drummer, a vocalist, a bassist, and a guitarist and/or keyboardist — hashed out ideas and discussed arrangements. One band played a bouncy keyboard-melody-driven pop song. Next door, another band played a slow, foreboding, minor-key dirge. The quality of the songs varied — especially depending on how much prior experience its members had with their instruments — but nonetheless, it was impressive how much they’d accomplished in such little time.

Sunday afternoon’s show at The New Parish started off with staff-led warm-up exercises and a sing-along to Whitney Houston’s “I’m Every Woman.” Then the roomful of family, friends, and supporters cheered on the bands as they performed their songs one by one. Whether or not they played their songs perfectly or not didn’t matter. They all received applause, high-fives, and hugs.

In many ways, the whole thing seemed unrealistic, and I couldn’t help but feel that the “real world” of being in a band might be a total letdown. Learning to play an instrument takes hours and hours and hours of practice. Finding bandmates is a daunting task, and writing songs and booking gigs aren’t so easy either. If your songs suck, people walk out. Most likely you won’t be playing at a popular venue at 3 o’clock in the afternoon on a Sunday when everyone is awake and excited, but at a dive bar closer to midnight on a Wednesday, when all your friends are asleep.

Then again, Women’s Rock Camp seemed to be more about the experience than a specific end goal. Few of the women I interviewed expressed a burning desire to be in an actual rock band. Many had simply always been curious, and wanted to know if they could do it. Women’s Rock Camp gave them the safe space and structure to play. Clearly, they succeeded — and had a lot of fun in the process.

Miller said the ultimate goal is to create a world in which Girls’ and Women’s Rock Camps aren’t necessary. Of course, women have been rocking for years now. But images of women playing instruments and making noise still aren’t prominent enough to be considered normal. “The whole world is Boys Rock Camp,” said Miller.

For one weekend, at least, it was nice to pretend otherwise. &#8;