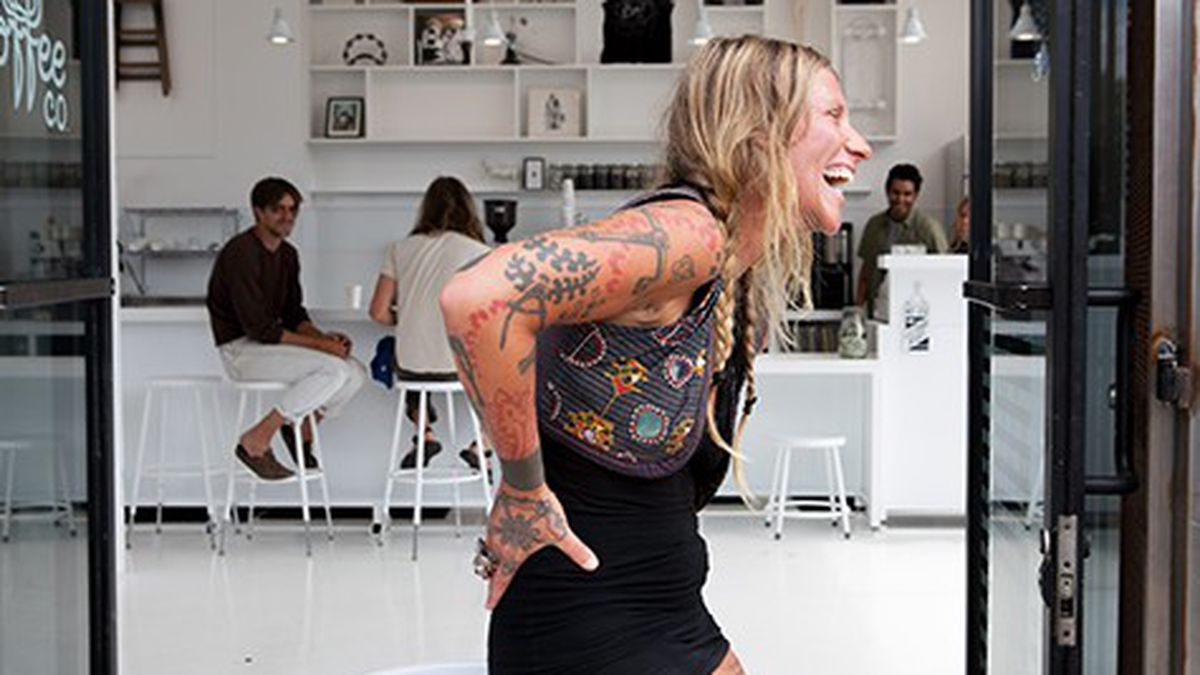 A Toast for The Town

Trouble is now brewing in the East Bay. In June, Giulietta Carrelli, who is often credited with starting San Francisco’s artisanal toast trend, quietly opened the third branch of Trouble Coffee at 1545 Willow Street in West Oakland after a year of planning.

Like the two other Trouble locations in San Francisco’s Bay View and Ocean Beach neighborhoods, the newest branch serves thick slabs of toast, custom blends of Intelligentsia coffee, Thai coconuts, freshly squeezed grapefruit juice — and nothing else. It’s the diet the self-described artist and punk rocker relied on during her battle with schizophrenia.

Her cafes all serve the same items, but Carrelli decorates each shop to represent a specific time in her life. Her first cafe in Ocean Beach was built with friends during the most tumultuous of these time periods. “I was crazy,” she said. “I built it out of desperation. I didn’t have any money for anything. It was sex, drugs, rock ‘n’ roll — and swimming in the ocean.” Fittingly, that first cafe’s decor is a helter-skelter of driftwood and reclaimed artifacts. Her second location in Bay View is arguably more cohesive — stemming from Carrelli’s desire for change — though it still serves as a tribute to punk rock and her friends who helped when she was struggling. The metal-and-steel interior matches the industrial neighborhood, while also representing the stability she was searching for.

Yet it’s the decor of her new Oakland location that is the most unexpected: The shop is entirely white, save for a few items of punk memorabilia that hang behind the register. The look cultivates an ambience that is more akin to an art gallery than a coffee shop, which, Carrelli said, is sort of the point. The day before her Oakland cafe opened, she finished her first painting, a massive abstract piece that takes over the left wall of the small shop. “It’s seven shades of white,” she said, laughing.

As is usually the case with Carrelli, the blindingly pristine color scheme has a personal significance: For her, the white art and walls symbolize the purity of youth. “I didn’t know that I was going to lose my mind at sixteen, so up until then, I had this pure life, which in my mind is white,” she said. “So the stuff that I put in this shop is [reminiscent of] the feeling I had when I had my first kiss with my first boyfriend, and that’s also when I found punk, and I found experimental music, and I found free jazz, and [I found] my whole world.”

Carrelli’s first punk T-shirt, from the band Rudimentary Peni, hangs behind the register, along with a skateboard and a comical picture of Ronald and Nancy Reagan with their eyes blacked out. For Carrelli, childhood innocence is steeped in playful rebellion.

Trouble Coffee’s famous toast — which is available with cinnamon and butter, Nutella, or peanut butter and honey — also harkens back to Carrelli’s childhood. “The toast reminds me of my mom, who always used to take care of me,” she said. “Toast is a memory. Things get crazy when you get older, and I think cinnamon toast reminds [people] of that time before it gets chaotic, you know? When things were simple and your mom used to make toast on Sunday mornings.”

On a Thursday morning at the West Oakland cafe, customers trickled in regularly, and most of them left with a slice of that toast. But despite Trouble Coffee’s success, there’s one question newcomers always ask that still bothers Carrelli: “Why don’t you have a menu?” Indeed, none of her cafes have a formal written menu.

“When people have a menu, they look at it, and they don’t talk to the staff — they talk at the staff,” she explained. “I hire good people. If you don’t know what you want, ask them.”

Carrelli wants to facilitate communication. She wants you to know the names of the baristas, and she wants you to meet other customers and form connections. “There are always like five or six barstools — sit down and talk to someone,” she said wryly. “This is a community. If it ever becomes just a coffee shop, I’ll shut it down.”

For fans of good toast and coffee, that’s a prospect that would certainly prove troublesome.