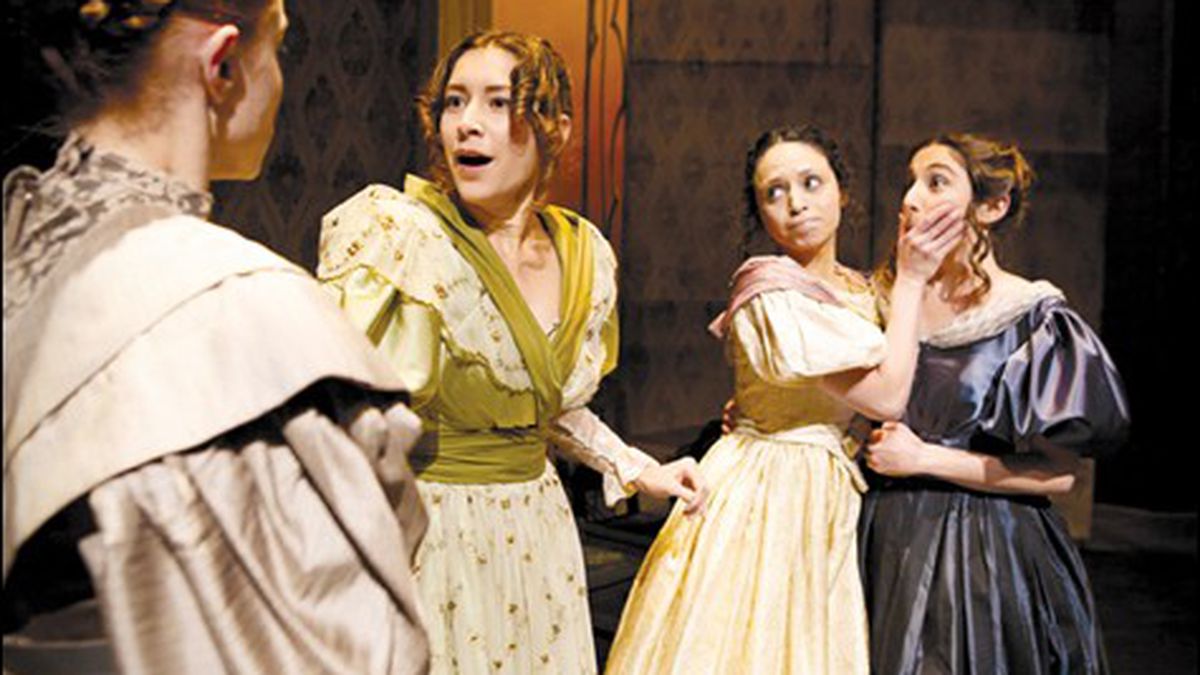 A Sprawling Voyage for Shotgun Players

You don’t see that many sprawling epics in contemporary theater, which explains why Tom Stoppard’s Coast of Utopia trilogy is oft characterized as a test of endurance. London audiences had to watch the whole nine-hour series in one sitting when it premiered in 2002; thankfully, American directors tend to present the three plays in isolation. But even one-third of the Coast is quite an undertaking, particularly for a small theater company.

Fortunately, Shotgun Players has always been known for letting its ambitions outstrip its purse strings. The company’s new production of Voyage, the first installment in Stoppard’s triptych, straddles a period of 11 years and features 21 actors. With its storyline about youth activism and intellectualism in the years prior to the Russian Revolution, it’s a resonant slice of history, filtered through melodrama (i.e., love, loss, marital problems, death) and larded with philosophical ideas. That’s a potentially lethal combination, but Shotgun Artistic Director Patrick Dooley found ways to limn the disparate elements. Like the source material, his Voyage is big, florid, and somewhat disorienting — but it also crackles.

Dooley is fond of saying that he’d rather bang his head against a brick wall than stage an “obvious” classic — in the case of Stoppard, that would be Rosencrantz and Guildenstern Are Dead. While Coast isn’t exactly obscure, it’s certainly harder to produce, and that alone might make it more of a rarity. Dooley pledged to stage one chapter a year through 2014, thereby dividing the play into manageable bits. His cast mixes familiar faces with rookies; his set, designed by company member Nina Ball, is endlessly mutable.

And, fittingly, Voyage starts on a crescendo. Literally. Strings soar in the background as the curtain opens on the Bakunin family dining table, where patriarch Alexander (John Mercer) presides with the air of a despot, his English accent lending authority. Alexander’s daughters sit around the table in stiff period costumes, their hair coiffed in tight curlicues. Liubov (Christy Crowley) is the oldest and presumably the most cerebral. Varenka (Leanna Sharp) is feline, sentimental, and locked in an unhappy marriage. Tatiana (Caitlyn Louchard) is theoretically the family tomboy — by 19th-century Russian standards, at least — which means she plays sports and has a somewhat unhealthy admiration for her brother Michael (Joseph Salazar). Alexandra (Nesbyth Rieman) is the youngest, the giddiest and the most likely to laugh at inappropriate moments.

The girls and their brother, Michael, who is sent to artillery school but who eventually flees to the university to become enamored of Immanuel Kant, represent a new current of youthful idealism and political zeal in Russia. The rift between members of this generation and their parents is readily apparent within the Bakunin household, where the children talk about individualism and “truth” while their mother (Zehra Berkman) abuses her serfs. Dooley would characterize the patriarch Alexander as a dyed-in-the-wool “liberal,” given that he studied overseas, married late in life, and seems reasonably tolerant of his children’s behavior. He is, however, a veritable aristocrat, inheritor of the grand Premukhino estate and protector of “500 souls” — meaning serfs.

Since it’s a play about tectonic shifts in culture and politics, much of Voyage is devoted to verbal sparring between university students. Vissarion Belinsky (Nick Medina) is the most vociferous, particularly when trying to hammer home his argument that Russia has no literature. He spends much of the play volleying philosophical platitudes about “the self” and “objective reality” with Michael. The point of all this great-booksy talk isn’t entirely clear in the context of the play, other than to establish that Russia had a nascent intelligentsia in the 1830s and 1840s. Granted, if you’re familiar with Stoppard’s other work, you know that he loves languishing in pointy-headed intellectualism, whether or not it propels a story forward.

At any rate, it makes the script seem extremely smart and, at times, hopelessly difficult to navigate. The actors in this production plow through with all the enthusiasm of a college student devouring Phenomenology of Spirit. They manage to hold Stoppard’s script together as it careens in every direction, skipping over years and defying chronology. Ball’s simple, elegant set manages to represent multiple cities and landscapes. By the end, we’ve returned to a space of innocence, one that Alexander can call “paradise” without exaggeration. Perhaps Stoppard wanted the dust to settle before he launched chapter two.