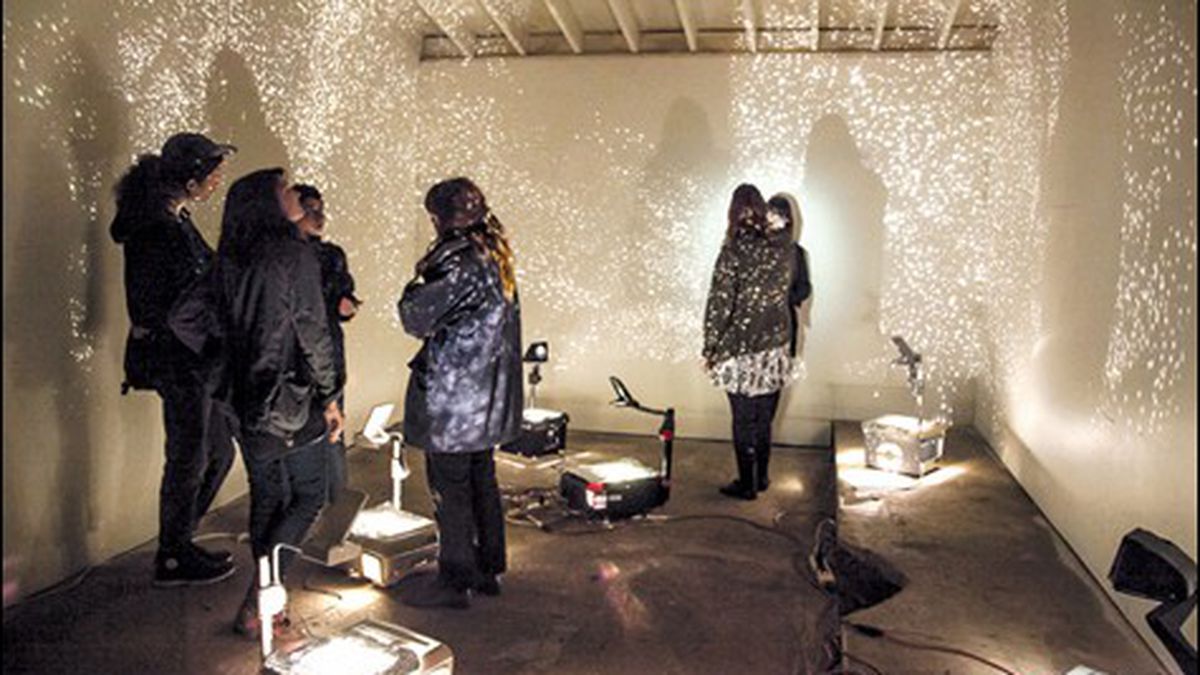 Two young sculptors transform a carport in West Oakland into a gallery to foster emerging artists — and find community along the way.

Two years ago, Emmy Moore and Jonah Susskind met at a “community living experiment” in San Francisco’s Bayview district: a bus — in addition to other ad-hoc homes — that housed some fifteen artists with various aesthetic proclivities and mainly showcased noise shows. “It was fun for a while, but like most of these places, things got crowded and people’s artistic and living agendas began to clash a bit,” said Susskind.

Moore and Susskind, both sculptors, decided they needed their own space, both literally and figuratively, to focus on visual arts. “We decided to see if we could make a place that was strictly for visual studio practice,” said Susskind. “The fabric of the Bay Area art community is unlike many places in New York City, for example. Here, it’s harder to segregate one discipline from another — sculpture, painting, photography, drawing, theater, installation art.”

Eventually, Moore and Susskind found a sweeping loft in the heart of West Oakland on Peralta Street. There they discovered an old carport being used as storage for adjacent businesses behind their loft, and it got their gears turning.

“We both had studied sculpture in college and were both feeling like there wasn’t an outlet for a very lo-fi level of exposure,” said Moore. “And we had all these friends making excellent visual arts. So we began pouring time, and energy, and money into grassroots art.”

The couple asked around the community if anyone would mind if they commandeered the carport and transform it into a scrappy art gallery. After getting the necessary okay, they threw up some walls, painted them white, and added some lights. The result is a kind of effervescent cube they dubbed S.H.E.D. Projects.

Because of the unconventional space, the two artists — who recently married — decided they wanted to exhibit work that was similarly unorthodox and site-specific. “We wanted to challenge artists to make work that was outside their comfort zone and use the crude exhibition space to their advantage,” said Moore.

Last July, S.H.E.D. Projects expanded its horizons, raising $3,150 to mount House Show, an exhibit that brought together sixteen curators and artists to display work in a rented house down the street from Moore and Susskind’s loft, defying the typical “gallery gaze” of the white wall. The exhibit’s goal was to challenge notions of what art — and a gallery — could be. Moore said the exhibit, which re-appropriated a domestic space and transformed it into an immersive gallery of sorts, was inspired by 3020 Laguna Street in Exitum, a short film about a group house show in San Francisco.

The crux of S.H.E.D. Projects, however, has always been the converted carport and the cement courtyard surrounding it. While the cube is, essentially, just four “white walls” and closely resembles an actual gallery, the space merely serves as a blank slate for artists to scrawl on, project on, paint, splatter, and defy. One of S.H.E.D. Projects’ only prerequisites is for artists to create site-specific pieces that extend beyond the boundaries of the four walls. They want exhibits that cross mediums, extend into the courtyard, force interaction, and generally embrace the scrappy spirit.

“This isn’t a space asking for rectangles on the wall,” said painter Kara Joslyn, whose solo show, Kara Vaggio Does Sol Lewitt, will open at S.H.E.D. on Saturday, August 3.

“This space has been very unique,” continued Joslyn. “You can do whatever you want and you don’t know how it’s going to turn out. That’s what Jonah and Emmy encourage, and there’s something so beautiful about having that opportunity. You can be wild and not have to worry about the commercial aspect of art and push yourself. If people are brave enough to come here, the rewards are huge.”

Josyln’s exhibition will repurpose work by the late minimalist artist Sol Lewitt, employing radiating gradients and the optical effects of chiaroscuro (light emerging from darkness.) Channeling Lewitt’s severe and often “visually stoic” aesthetic, Joslyn’s show will feature a series of three twelve-foot-tall paintings — all in black and white — giving the illusion of an interior glow. The space will also be enclosed by a translucent plastic wall, creating a “light sculpture” that people can enter.

Joslyn cites abstract expressionist artists like Keltie Ferris and Amy Sillman as influences. “It’s a fertile ground they’ve sown for women artists, but I want to take it further as a sexually empowered feminist,” she said. Minimalism has, historically, been considered a rather male-dominated art form, and Joslyn urges viewers to consider how minimalist work evolves when created by a highly feminine woman.

While the Oakland resident admits that San Francisco may have more artistic “clout” and an “international vibe,” Joslyn thinks Oakland ultimately trumps it. “There is an energy in Oakland,” she said. “It’s not only really supportive but all the risky, edgy stuff is happening here.”

Since its initial launch in September 2011, S.H.E.D. Projects has mounted fifteen art shows in addition to talks, music performances, poetry readings, and film screenings. It also received a grant from the San Francisco nonprofit arts organization Southern Exposure this year that will, in part, be used to weatherproof the space and create more offbeat programming.

“Our relationships with local artists is the juicy part of S.H.E.D. Projects, but it’s equally important to be a community center,” said Susskind. “So many experimental arts spaces in Oakland, like MacArthur B Arthur, are now defunct and gone. We want to make a space for an audience, too, not just the artists. That’s a two-way street, and being in the middle is a great place.”