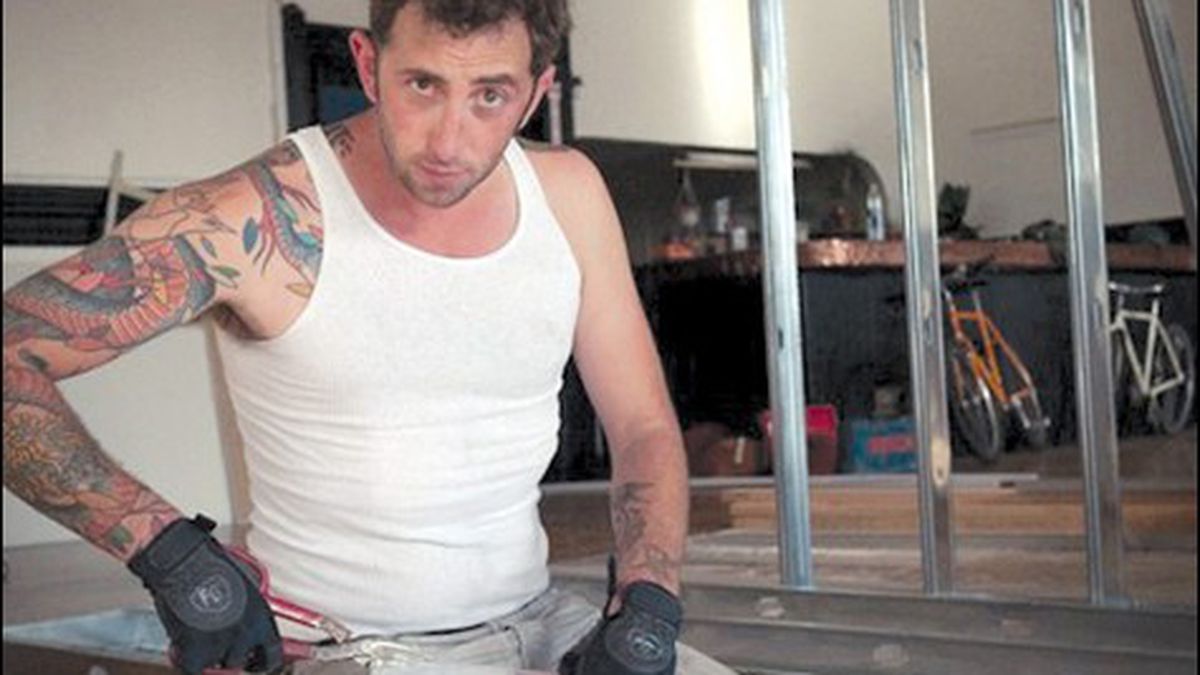 Adam Hatch was never one to follow rules, including his own. Take the time he participated in a “Human Zoo” exhibit that he himself helped curate, at LoBot Gallery in West Oakland. The idea was that LoBot’s six resident artists fabricate six cages — some smaller than others — then lock themselves inside for a full week. (Since the cages varied in quality, they drew numbers out of a hat to decide who would inhabit which one.) “There was a lot of press at the time about Guantanamo and confining people, and we wanted to experience it for ourselves,” Hatch explained recently. They tried to make the experience as authentic as possible, he said. Participants could only go to the bathroom when the zookeeper took them. They could only eat oatmeal. Hatch couldn’t stand it.

“At one point I was like, ‘Fuck this,'” Hatch said, recalling the incident as he dangled an American Spirit cigarette and drank pino grigio from a boxed container. After two days, he kicked down the door to his cell. “What actually happened was I broke out at night, went out with friends to a bar, got really drunk, came back, and tried to fix it.” The zookeeper noticed the next day and kicked him out. She also noticed that Hatch had snuck in several provisions from the outside world — including marijuana spliffs, which he’d thrown to other prisoners. “We got in this huge fight,” Hatch said. He was duly excommunicated. The prisoners who’d accepted his gifts got their pillows taken away.

That story could tell you several things about Adam Hatch’s character — namely, that he’s rather unprincipled, not to mention he likes creating structures but doesn’t always adhere to them. Also, and perhaps more importantly, he’s a total individualist. Such qualities have made Hatch a leader in the Oakland art community. Years before the Art Murmur craze, Hatch was finding old warehouse spaces and transforming them, helping to create a scene in which galleries could be less mannered, less rarefied, and less museum-like than conventional wisdom dictates. Now he’s applied that philosophy to a new venue at 2232 Martin Luther King Jr. Way, formerly home to a dance club and janitorial supply store. Hatch bought the space this year, rechristened it the Starline Ballroom & Social Club, and began hosting one-off events (mostly invite-only). If all goes according to plan, he may eventually open a restaurant on the bottom floor. He could turn that relatively sterile block into something exciting. He could be the proprietor of, you know, a ballroom.

“Could” is the operative word. Several have tried. The most recent were Andrew Jones and Steve Snider, who now run a business called Oakland Venue Management. In 2005 Jones, who was then nineteen, opened a hip-hop club called 2232 MLK. Snider found the place when he was buying janitorial supplies (Starline Janitorial is the storefront downstairs — hence the name Starline Ballroom) and told Jones, who he considered a protégé. Jones got it the following day on a handshake lease. Like everyone else, he liked the furnishings — a big dance floor, small bar area, and nondescript facade — even though he found the area tenuous. “It’s located on a rough corner, and has little-to-nothing desirable about it,” Jones said, predicting that Starline is still hundreds or thousands of dollars away from being a successful restaurant.

That said, Jones also acknowledged that if the ballroom succeeds, it could very well become part of the downtown redevelopment area. “It’s the end-cap to the West Grand-Broadway retail area that begins with Luka’s and ends with The New Parish,” Jones said. He added that stranger things have happened: Just consider the success of Brown Sugar Kitchen, which opened right in the heart of West Oakland.

And Hatch seems to have the ambition and creativity to make it work — even if he appears to lack venture capital right now. He moved from Los Angeles to the Bay Area twelve years ago with intentions to work at Alta Bates hospital. Those dreams fizzled as soon as he moved to a warehouse on San Pablo Avenue called The Creamery. (It later became the WC). He started his first gallery there in 2001, then moved operations to Liminal Gallery on Myrtle Street, and later leased a giant industrial building in West Oakland, which became LoBot. For the past few years he has run his own eponymous gallery in the 23rd Street corridor, in a storefront that used to be called Ego Park. His current show, called While We Sleep, features graphic photographs from the war in Afghanistan. It’s already earned him at least one death threat, from an anti-war protester who threatened to firebomb the venue.

What separates Hatch — who’s 32 and has sleeve tattoos and a Hollywood jawline — from the pack is a certain willingness to take risks and mount big projects, even when he lacks the resources to support them. Many of his past achievements — like the water show at Liminal, which required 6,600 cubic feet of water, plus electronic dragonflies — would never have made it past the (metaphorical) drawing board, had it not been for that mindset. He first got the idea for Starline from friend and collaborator Anna Ash, who told Hatch she wanted to live in a ballroom. He thought, well, why not? In March, he set his sights on the 2232 MLK space, which had been dormant since Snider and Jones left in 2008. He and a small coterie of friends began dreaming up plans: They’d put a restaurant downstairs in an ample-size room with a high, pressed-tin ceiling. Upstairs would be the social club, with its bar, stage, and hardwood floors.

How, exactly, Hatch will finance this operation is anybody’s guess. He doesn’t even know yet. “Investors,” he offered. “Sweat equity. Me being a contractor, I can cut the cost down pretty significantly just by doing the work myself.” Whatever the case, he has to figure it out pretty soon. Hatch hopes to cut the ribbon on Starline sometime this fall, and as it stands now, the permits haven’t been secured and homeless people are still peeing on the door a couple times a week. Hatch remains sanguine. “For years I’ve been doing illegal shows, and this time, I wanted to do it legitimately,” he said. “This place had all the elements. I saw the potential with its dance floors. For a builder-arty person, it’s a wet dream.”

Tuesday’s Briefing: Up to $1 billion in false unemployment claims were...