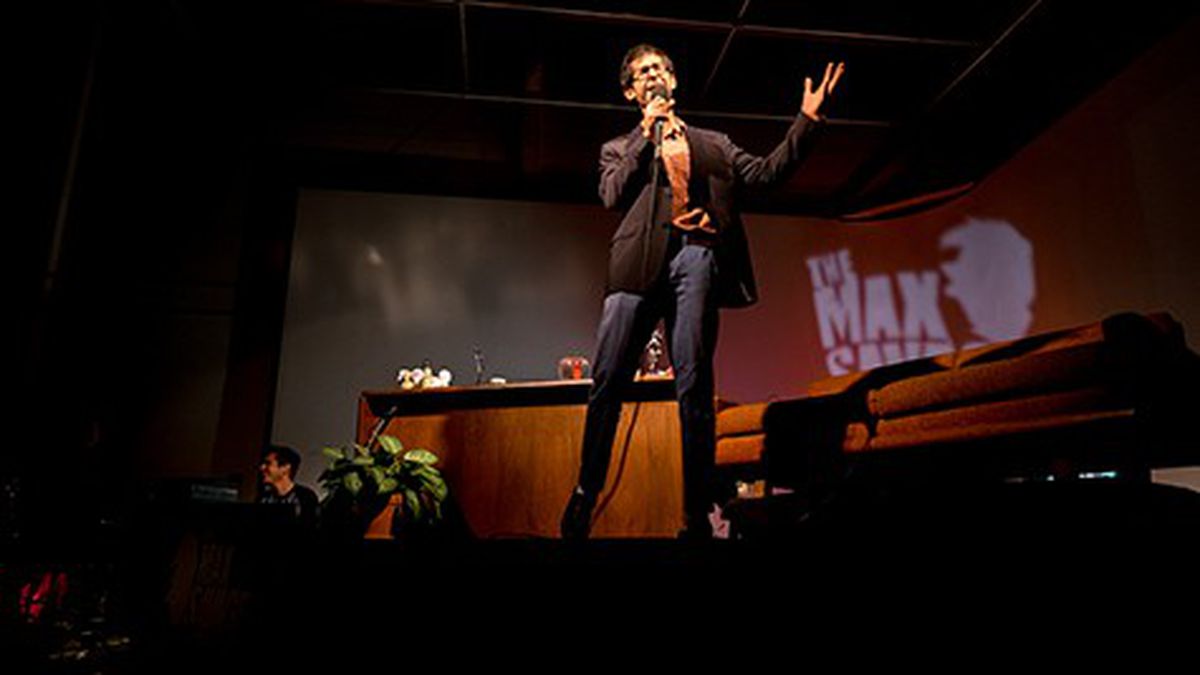 A Live Talk Show that Leaves no Digital Trace

The inaugural Max Savage Show was a bit of a whirlwind for everyone involved. Max Savage Levenson, the host, received an impromptu haircut onstage. Soon after, Oaktown Indie Mayhem’s Sarah Sexton received a delivery of the trimmings hidden in a pizza box while sitting on the interview couch. Later, Chaz Bundick (aka Toro y Moi) sat shyly on the same couch and talked about Jurassic Park, then sang an acoustic set of songs from his then-forthcoming album. Two audience members, separated by a folding wall, answered questions about each other based solely on voice, then subsequently made out. Whiskey was chugged to the accompaniment of a live jazz band. Other antics occurred, but the details are difficult to place, as it was all very in-the-moment. It would be useless to try to relay a record of it, anyway. None of it was taped. You just had to be there.

The Max Savage Show is a live-audience talk show that somehow fits the absurd humor of The Tim and Eric Awesome Show, Great Job! into the format of The Late Show with David Letterman. At times it replicates elements from each style to an extreme, but for the most part it frolics somewhere in between. The sold-out first “episode” took place at the end of January, in an Emeryville warehouse that’s home to the media production company Scandinavia (5743A Horton St.). That’s also where the second episode will be held on April 9.

Levenson is a music journalist who writes regularly for KQED, NPR, and The Bay Bridged. He moved to the East Bay to attend journalism school, and stumbled into a tight-knit community of artists and musicians that quickly signed on for collaborations. A few of Levenson’s and his posse’s projects include a music compilation called non•market comp 1 that was released last spring, and a zine that photographer Ginger Fierstein (who produces The Max Savage Show) co-published last summer under the “non•market” moniker as well. The non•market compilation includes local acts Astronauts, etc., Trails and Ways, Waterstrider, and No Sé — but bands such as Bells Atlas and The Seshen are also associated with the collective. The zine includes work by some of the same folks, accompanied by their visual artist friends.

For both the first and second zine (which is nearly finished), Levenson interviewed members of his network in ridiculous situations. The upcoming issue includes an interview with Waterstrider’s Nate Salman, which Levenson conducted while lying on top of him in a hammock, and another with artist Emily Schumacher, completed as she painted a nearly nude portrait of him. For the show, Levenson’s goal is to bring that same playful get-to-know-you spirit to a live audience, while highlighting the talent in his creative community, and in the Bay Area at large. “I feel like interviews with musicians a) can be really rote, and b) can be super super serious,” he said in an interview. “It seemed like a fun opportunity just to sort of laugh with these guys and break down that barrier a little bit.”

In addition to visuals, the show also includes an element of audience participation, and the thrilling potential for everything to go horribly wrong — or beautifully, spontaneously right. On top of that, it’s ephemeral. In the style of Pop-Up Magazine (a “live magazine” from the people behind The California Sunday Magazine), the production is a rebellion against the automatic expectation that everything will be uploaded and archived for online consumption.

Levenson and Fierstein said that “Episode 2” will be much like the first, but with a little more technical finesse. The special guest will be the hilarious local rapper Kool AD (formerly of Das Racist). Anna Sussman, managing editor of NPR’s Snap Judgment, will be talking and sharing a tape from an upcoming episode of her popular show. Musical guests include The French Cassettes and Antique Naked Soul. Plus, the chefs from Homestead will be doing a live cooking demonstration and feeding the crowd. (Levenson initially proposed that they cook onstage while people stripped awkwardly around them, but that portion of the segment didn’t quite come together).

The Max Savage Show aims to run for a six-episode season, but Fierstein admitted that three might be a more realistic goal. So if you want to see it, you better do so before it disappears.