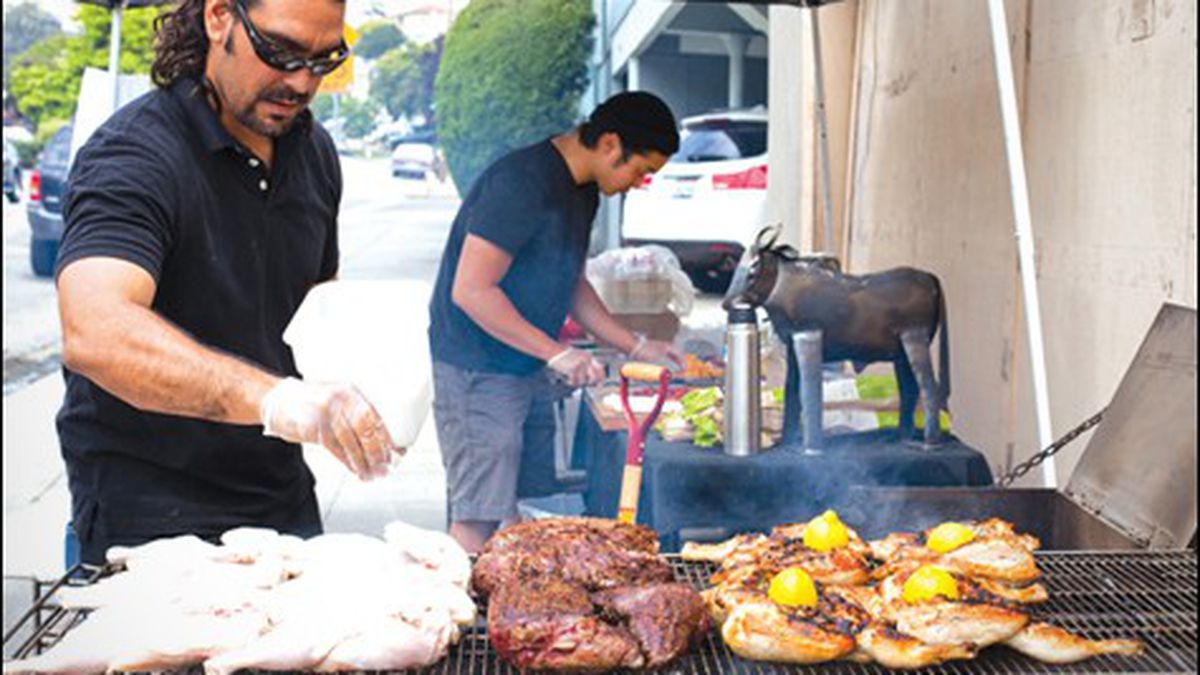 A Guide to Grilling and Smoking

East Bay chefs share their secrets for putting together a great summer barbecue — with or without an actual grill.

Summertime and backyard grilling go hand in hand … unless you don’t have a yard, a grill, or any of the requisite paraphernalia — wicked appetite and supply of cold beer notwithstanding. And even if you have everything you need to grill outdoors, the prospect of another meal of overcooked burgers and hot dogs might not hold appeal.

So I sought the advice of local chefs and other food pros — the very folks who earn their livelihood grilling and smoking meats (and vegetables, too) at a high level and who, as it turns out, often live in small apartments with shared (or nonexistent) yards and no room for fancy equipment. The consensus? With a bit of MacGyver-style improvisational know-how and some good old-fashioned elbow grease, there’s no reason apartment-dwellers — even those with nary a patch of grass to call their own — can’t put together a drool-worthy summer barbecue.

Beyond Burgers and Hot Dogs

It should come as no surprise that a great grilling experience starts with selecting the right piece of meat. Toward that end, your local butcher can be an invaluable resource. Aaron Rocchino, co-owner of Berkeley’s Local Butcher Shop (1600 Shattuck Ave.) and a former chef at Chez Panisse, said he often steers customers toward cuts they might be less familiar with. The advantages of this are twofold: These unsung cuts are often just as tasty, if not tastier, than their more popular counterparts (like rib eye and New York steak), and they’re usually a bit cheaper, too.

One of Rocchino’s favorite cuts of beef is the coulotte, which is the cap of meat located above the top sirloin, and which can be purchased whole or as individual steaks. If he knows a customer plans to grill the coulotte whole, Rocchino will leave on a pretty substantial layer of fat, which, when rendered on the grill, gets nice and crispy and allows the meat to develop a “caramel-y” flavor. At Local Butcher Shop, the coulotte sells for $20 a pound — not inexpensive, but still less costly than a rib eye or a filet mignon. For a less expensive beef option, Rocchino recommends the flat iron ($11/lb.), a part of the shoulder that “works real hard” and thus develops great flavor.

In general, Rocchino tends to recommend grilling whole roasts or big, shareable steaks — thicker cuts that can spend more time on the grill without overcooking, and are thus more conducive to flavor- and crust-development.

When it comes to the grilling itself, Rocchino has three tips: 1) Let the meat come to room temperature before you cook it, lest you risk burning the outside of your steak while the middle is still stone-cold raw. 2) Season the meat while it’s coming to room temperature — or even earlier if it’s a big roast — so that the seasoning gets inside. 3) Once the meat is cooked, wait awhile before cutting it to avoid losing all those precious juices.

Meanwhile, chef Lev Delany, the “meat guy” at Oakland’s Chop Bar (247 4th St., Ste. 111) and the soon-to-open restaurant and beer garden, Brotzeit Lokal — he of the roasted whole pigs and house-made charcuterie — keeps it simple when he grills at home. He goes to the Marin Sun Farms butcher counter at Rockridge Market Hall (5655 College Ave.) to get a bone-in porterhouse, about two-and-a-half inches thick. Delany rubs the meat with salt and pepper, lets it come to room temperature, and then cooks it on a hot grill for about ten minutes on each side. You can even try the same method on the stovetop with a cast-iron skillet, but “it will be smoky as all holy hell,” Delany warned.

Lizzy Boelter, proprietor of The Grease Box Mobile Kitchen — a gluten-free food business that’s most famous for its fried chicken — draws on her Southern heritage when she grills at home. One of her favorites is pork ribs (see recipe on the next page), cooked “low and slow,” coated with a dry rub made with old, ground-up coffee beans and chili flakes. It’s an adaptable recipe: Boelter said she’s had success cooking the ribs on the grill, in the oven, and even in the toaster oven (that jack-of-all-trades in many an apartment kitchen).

The key to this slow-cooking approach, Boelter said, is to grill the meat until it has the texture you want — not to be a slave to the meat thermometer: “That’s one of those things that chefs know that normal people might not know: Don’t worry about the temperature. If you’re cooking something for ten hours, it’s going to be done.”

All of this said, when done properly a grilled burger is a glorious thing. Even after serving up hundreds of burgers every day for his gourmet food truck business, Fivetenburger, Roland Robles still finds himself making them at home all the time. “Since we sear them on the trucks, having them grilled at home is a treat,” he said.

Again, the quality of the meat matters, but Robles isn’t overly fussy. For home cooks, he suggests hitting up the butcher section at your local grocery store: “The closest carnicería would be a fine choice.” Ask for the freshest grind — most places regularly grind their chuck, which, because of its higher fat content, makes for a nice, juicy patty. (That 95-percent-lean stuff might make you feel less guilty, but it’ll surely produce a dry and flavorless burger.) Robles is also fond of using beef alternatives for his homemade burgers: turkey, bison, seasoned pork, and lamb.

For those without a grill, a cast-iron skillet (or other heavy-bottomed pan) and a very hot oven (turned to its highest setting) can yield great results. Robles suggests heating up your skillet on the stovetop and searing the patty in some butter until a nice crust forms. Then, flip over the burger and roast it in the oven until it reaches your preferred level of doneness — “it won’t take long,” Robles said.

This would be as good a time as any to mention Delany’s number-one tip for indoor grilling: “Take the battery out of the smoke alarm.” To which I would add, “open your windows,” and, of course, “be vigilant.” Grease fires are no joke.

Of course, all the aforementioned options don’t give consideration to vegetarian grill masters, and even the most committed carnivore can acknowledge that the vegetables are often the tastiest, and easiest, part of a great backyard barbecue. By and large, you can’t go wrong with the simplest prep: salt and pepper, olive oil, and some herbs. Delany is partial to spring onions and asparagus during this time of year. Later on in the summer, he likes the mini eggplants you can buy at the Wild Boar Farms stand at the Grand Lake Farmers’ Market — just split those in half and grill them, again with olive oil and fresh herbs.

Robles, on the other hand, likes to put together a salad of figs and romaine lettuce, both grilled and then tossed with a lemony vinaigrette, crumbly cheese (feta or cotija), and a drizzle of honey.

And, while they aren’t strictly vegetables, Boelter has been known to take a pot of dry beans, water, and salt, and throw it on the grill next to whatever meat she’s slow-cooking: “They took about five hours, but they were really good.”

Taking It to the Next Level

Beyond the basic grilling techniques outlined above, home cooks might also consider smoking their meat. After all, that’s the difference between true barbecue and what Southerners would simply call a “cookout.” While there are small electric smokers you can buy at any hardware store, that approach more or less requires access to a yard. For apartment-dwellers, Delany recommends this simple(-ish) hack: Take two square hotel pans (the kind often used for steam tables) — one that’s perforated and a deeper one that isn’t. Put wood chips (or tea leaves or whatever you’d like to smoke your meat with) in the deeper pan, put the perforated pan with the meat on top, and then cover the whole thing with foil. Place this whole setup on the stovetop, over low heat, and the wood will start smoking — Delany said he’s made tea-smoked salmon in about twenty minutes using this technique.

Chop Bar’s summer pig roasts are legendary, and according to Delany, roasting a whole pig inside of a Caja China — basically a big wooden box topped with a charcoal tray — is completely doable at home (outdoors only, please!), as long as you have a place to store the pig while it’s brining. (Delany recommends an oversized cooler filled with ice.) A small Caja China will probably run you $300, but you can use it over and over again, and man, will your friends be impressed.

And, for the truly ambitious, there’s the world of Argentinian-style parrilla, which translates literally as “grill.” Javier Sandes, proprietor of Javi’s Cooking, is one of the Bay Area’s foremost practitioners of this traditional Argentinian technique — which consists of slowly grilling meat over hot wood and charcoal. In Argentina, every kitchen has a parrilla with a built-in fire pit, but according to Sandes, someone fairly experienced with American-style grilling can put together a jury-rigged version: Take two small Weber charcoal grills, and use one of them as a fire pit. Light up your wood (he uses almond) and charcoal (he uses mesquite chips), then — once they’re good and hot — shovel them into the other Weber, put down the grate, and start cooking.

The trick is to control the heat. Sandes holds his hand right above the grill — if he can hold it there for three seconds or less before it’s too hot to bear, it’s very hot. Four to seven seconds is “medium”; eight to ten seconds is “low.” For the beef tri-tips and whole spatchcocked chickens that Sandes is fond of grilling, it’s essential to maintain a consistent medium heat for the hour-plus-long cooking time. If the grill starts to cool off, add more hot charcoal. If it’s too hot, move some of the coals away; otherwise, you’ll end up with meat that’s burnt but still raw on the inside.

Of course, Sandes is also well known for another Argentinian specialty: cooking whole animals al asador, on a large cross-like structure that’s set up over open flames. Watching Sandes cook a whole lamb for four and a half hours using this method is a spectacle to behold, and adventurous diners might consider hiring him to cook at their next big event.

But for the average backyard griller looking to show off in front of his or her friends? “I wouldn’t recommend it,” Sandes said.

Pork spare ribs or St. Louis cut ribs (a full rack will feed four; start with a half- or quarter-rack if you’re using a toaster oven)

2. Coat the ribs with the salt and let them come to room temperature for about an hour.

3. Rub the coffee and chili flakes onto the meat. Grill (with the lid closed) or bake (on a baking sheet or other oven-safe vessel) for about four hours or until “fork tender,” when the meat pulls away from the bone easily. (Alternatively, bake for three hours and then finish on the grill for a smoky flavor.)