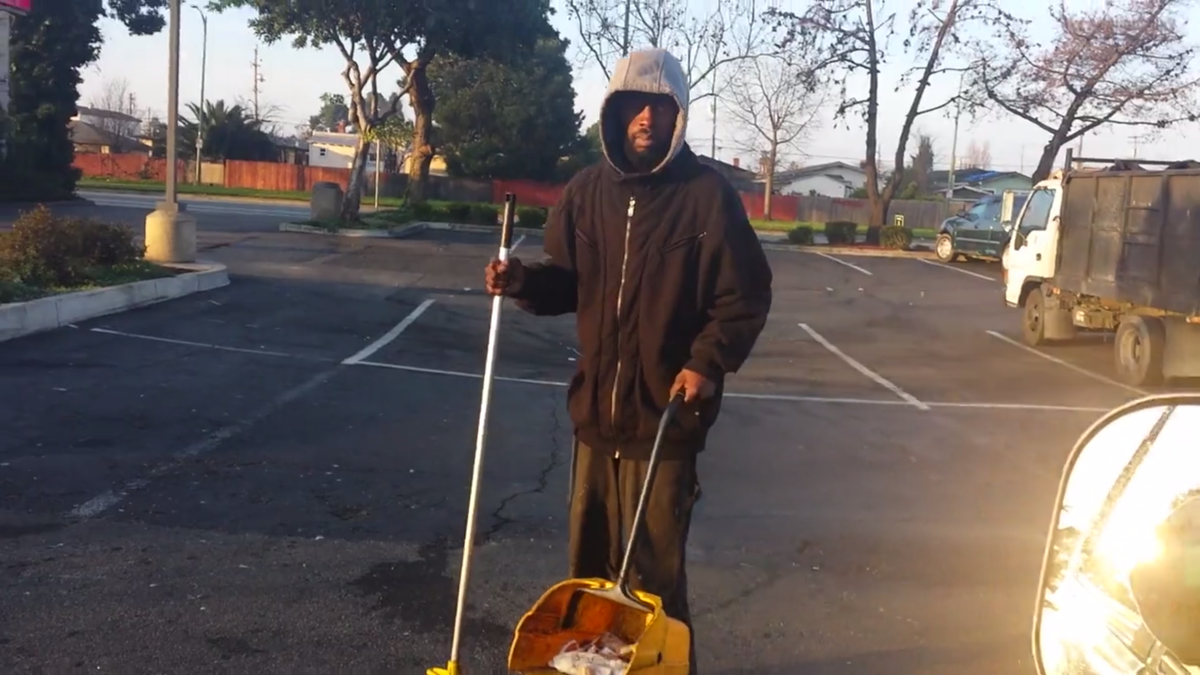 Video: An Oakland Taco Bell Is Paying Its Janitor in Burritos, Not Money?

By Darwin BondGraham
Feb 19, 2015
A video provided to the Express appears to show a homeless man cleaning the parking lot of Oakland’s 6900 Bancroft Avenue Taco Bell in exchange for tacos and burritos, not wages. The video raises new questions about working conditions and management at the East Oakland restaurant. (See this week’s issue of the Express for the full story.)

The footage was shot by a family member of one of the restaurant’s employees. A current employee of the store, who spoke to me on the condition of anonymity, said that the man seen sweeping the parking lot in the video is homeless, but he cleans in and around the Taco Bell. The employee claimed that in addition to the store’s manager “hiring” and paying the man in food, the store’s corporate owner, Golden Gate Bell Restaurant Holdings, LLC has been aware of the situation.

In the video, which was taken approximately two weeks ago, an unidentified man driving by the fast food eatery pulls alongside a pedestrian who is sweeping the parking lot. The driver, filming from his cellphone, asks, “Hey buddy, how much they pay you man?” The man shakes his head no. “They don’t pay you nothing?” asks the man behind the camera. The man with the broom again shakes his head no, nothing.

When asked if the restaurant gives him food for his work, the man with the broom responds: “Like three tacos, three burritos, and like a little burrito wrap.”

“And then you work every day for them? You clean the whole parking lot and around, and change the bags of garbage and everything?,” asks the man behind the camera. The man with broom, who identifies himself as Otis Ingram, Jr., shakes his head in the affirmative.

I could not find Mr. Ingram when I visited the Taco Bell last week, but check out the video for yourself.

I provided a copy of the video to Randy Rodrigues, the CEO Golden Bell Restaurant Holdings, LLC, the owner of the Taco Bell. Rodrigues did not respond to an email asking about Ingram, or whether the allegations that the company is paying him in food are true. However, in an email last week, Rodrigues provided a statement from Golden Gate Bell denying any allegations made by its employees.

Last week when I visited the Taco Bell, I spotted the store’s manager sweeping the inside the restaurant with a broom and dust pan identical to the ones Ingram is using in the video.

Beyond the obvious problem of paying a worker in tacos and burritos — instead of money — is yet another safety issue: If Ingram was asked by the Taco Bell’s management to clean around the store and sweep the parking lot, it’s unclear what would happen if he were injured, and whether or not Golden Gate Bell would assist him with medical expenses.