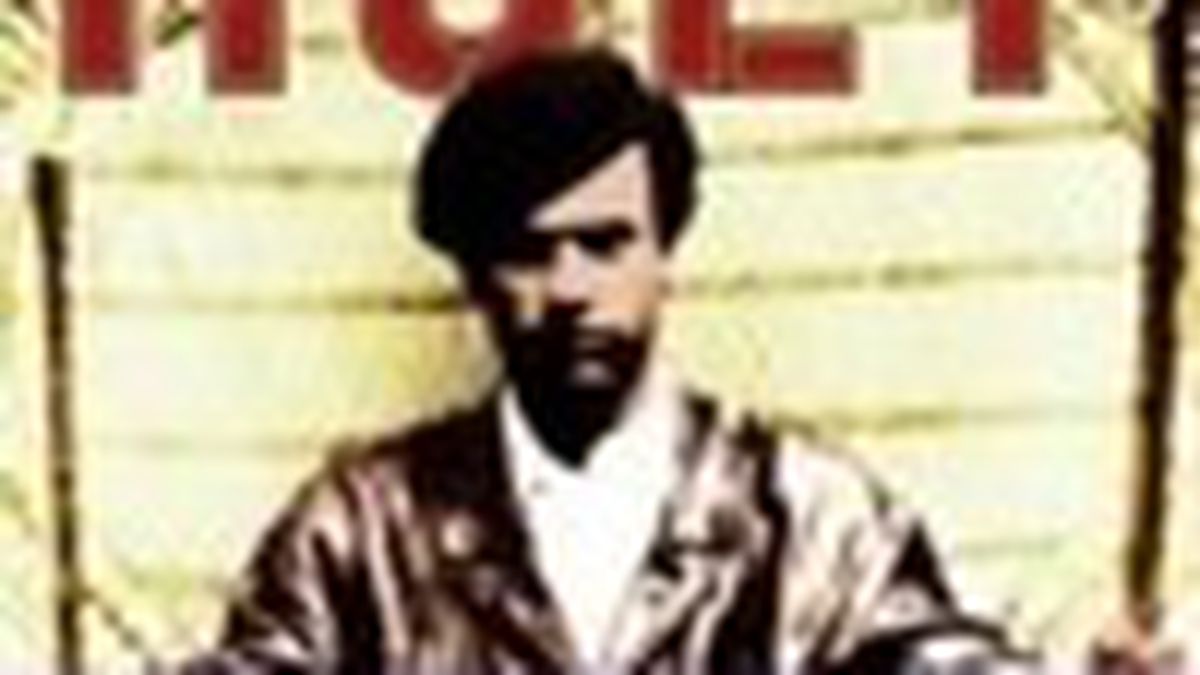 An amphibious hero, a Black Panther, and the dubious death of rock.

I Love You More Than You Know
By Jonathan Ames
Black Cat, $13
Ames has a distinct voice and an unconventionally attractive appearance — he’s tall, with receding reddish hair: Don’t ask how it works; it just does. And he writes mostly about himself. His humor is dry, and sometimes gross. So what if he’s never actually been on This American Life? His new collection of essays, journalism, and invented words is moving to the point of tears, and silly to the point of incontinence. In short, this is a deeply joyous book in which Ames confesses to many things: visiting a French hooker, chronic anal itch — yet you never get the sense he’s divulging such things to impress. He makes fun of himself, sure, but such things come naturally when you’ve convinced yourself, as he has, that new underwear and toothbrushes are luxury items. In “My Wiener Is Damaged” — you love it already, right? — Ames describes his quasi-parental, quasi-twelve-year-old son, out of whom he’s always able to get a good laugh via fart noises and dick jokes. Ames creates his own joy in these thirty pieces with his unashamed curiosity about almost any topic. Shit, even his mash notes to wildly overpraised icons Kurt Cobain and Jack Kerouac manage to duck cliché. With a less gifted writer, readers might need a reprieve from such stunts. With Ames, you don’t even ask, except perhaps for more.

On Seeing: Things Seen, Unseen, and Obscene
By F. González-Crussi
Overlook, $23.95
Much as we deny it, we humans love to look at bodies and all that bodies do: copulate, flash boobs at unicorns, get beheaded. Luckily, pathology professor and noted scholar González-Crussi, whose past books have been adapted for TV and the stage, knows that we like to read about such things as well. What could have been a polite historical survey of human eyesight becomes, in his hands, an uproarious catalogue of anecdotes, culled from mostly French and ancient Greek sources, that are so salacious, gory, and tasteless they’d make the Farrelly Brothers blush. Take the story of the lusty lad who dons drag to live among the nuns at a particularly nubile convent. Rumors of an impostor reach the ears of the elderly and “profoundly myopic” abbess, who orders her brood to congregate and strip for inspection. Our lad quickly devises a way to pull his genitals back between his thighs, but the sight of so many young nuns laid bare proves too stimulating: Mid-inspection, “the tumescent organ suddenly swings in the anterior direction; and the thick glasses of the abbess are sent flying to the other end of the patio … and look at him: with no hands!” Throw in exhibitionist cadavers, genital-enhancing mirrors, even a defecating dowager, and you have a surprisingly scandalous, enthralling read.

Huey: Spirit of the Panther
By David Hilliard and Keith and Kent Zimmerman
Thunder’s Mouth, $25
For all his charisma and accomplishments as a cofounder of the Black Panther Party, Huey Newton was a seriously troubled individual. A gifted intellectual and organizer, he nonetheless struggled academically, served jail time even before the Panthers got off the ground, and wrestled with substance abuse. As the party’s chief of staff, Hilliard knew Newton well, and this portrait is at times gripping, if unevenly executed. It’s at its best when offering inside stories of Newton at his most heroic, whether organizing young African Americans to empower themselves on the streets of Oakland or navigating the last stretch of his exile to Cuba in a rubber raft. Here, too, are the disappointing but mesmerizing foul-ups: Newton’s insistence on tracking down a student he thought was a prostitute just hours after getting off probation (which in turn led to years of fighting murder charges from a jail cell); the peculiar “throne” in which he was set up by benefactors in a high-rise overlooking Lake Merritt upon his release; and his sad final years, when he couldn’t shake off drug addiction. The text veers off into tangents, whether disdaining Eldridge Cleaver at length or getting caught up in legal technicalities regarding Newton’s trials, and it doesn’t clearly explain the collapse of the Black Panther Party in the last half of the 1970s. While there’s considerable insight into the contradictory impulses that motored Newton’s rise and fall, a haze surrounds why such a formidable leader and movement withered so anticlimactically .

Written Lives
By Javier Marías, translated by Margaret Jull Costa
New Directions, $22.95
Encyclopedic. Magisterial. Indispensable. Thankfully, this charming book of literary biography by Spanish novelist and translator Marías is none of the above. It’s something much more entertaining: Twenty-six writers’ lives, rendered in a wry and winning style. Even the chapter order contributes to the feeling of good humor. Lit-class standbys like Kipling, Conrad, James, and Joyce rub shoulders with less famous but equally fascinating figures, such as brilliant Parisian salon hostess Madame du Deffand and “equestrian poetess” Adah Isaacs Menken (once world-famous for her theatrical performances in a nude leotard). Each life gets five or six pages, and sometimes fewer, but somehow that’s enough. Marías has an artist’s eye for detail: Conrad’s faded bathrobe, Oscar Wilde’s greasy hands, the flat pillows on an invalid’s bed. Though generally indulgent with his subjects, Marías concedes that they were “fairly disastrous individuals.” James Joyce was “cold and distant” to almost everyone. Malcolm Lowry twice tried to murder his wife. Yukio Mishima committed hara-kiri. Marías admits he has “embellished” some incidents, though he claims he hasn’t invented any out of whole cloth (a spot check suggests he’s telling the truth). Academics might object, but then they’re not the intended audience. Marías isn’t trying to win tenure. He’s a writer telling stories about other writers. And even the sniffiest pedants would have to admit that he does that very well.

Is Rock Dead?
By Kevin J.H. Dettmar
Routledge, $20
No, it’s not. Anyone with a pulse could tell you that. Erudite metacritic Dettmar verbosely reminds us that ever since its murky whitewashed nascence, rock ‘n’ roll’s putative death has been announced, scoffed at, rediscovered, trumpeted, and debated ad nauseam while the music fails in any meaningful way to die. Back in September 1956, the Maddox Brothers and Sister Rose, a feisty Modesto hillbilly-rock outfit, recorded their potshot “Rock and Roll Is Dead,” suckerpunching a young Elvis Presley on their way to obscurity. Rock has thrashed about on its deathbed, Dettmar posits, “since within a year or two of its birth.” His book is structured as an academic literature review, tracing the “rock is dead” trope through fifty years of pop and scholarly criticism. Along the road, Dettmar invokes Joyce, Beckett, Bakhtin, and Adorno, indulging too in some good old-fashioned Nick Hornby-bashing. Indeed, it’s Hornby and his comfortably effete breed of “boomer triumphalists” who wistfully persist in droning mindlessly the same tired death sentences. Though Dettmar lacks the dumbcharged prowess of Lester Bangs, he thrums resoundingly on the triumphalists’ lame rote quibbles, noting a trend toward “embarrassing levels of self absorption.” A note about the hideous cover: Unless Dettmar’s sole intent is to publish a course reader for next semester’s American Studies seminar, he needs to know that packaging this lame can render a book unsellable. — Nicholas Raymond

Jack Fish
By J. Milligan
Soho, $10
This novel’s titular protagonist is sent up from submerged present-day Atlantis to the dry land of Brooklyn on a mission to kill defector Atlantean Victor Sargasso. The narrative follows Jack on his meandering odyssey through mostly the outer boroughs of New York City as he searches for Victor, flees some homicidal, gold-lamé-clad Maltese men, and follows a hot performance artist named Chloe. As is often the case, the city of New York itself is very much a character in this book, and Milligan presents many small, enamored paeans to it. While riding in a car through Brooklyn, Jack manages to register only the following evocative visuals: “FAT MAN SELLING ICE CREAM NO MONEY DOWN! INSPECTION STATION MIXED NUTS TORAH ACADEMY 99 CENTS.” The approach of a subway train becomes palpable when “a tumble of stale air rolled through the station.” Too often, though, the book falls back on either the painfully obvious or the forcedly clever. Jack has an epiphanic moment on the subway when he both realizes that midtown Manhattan is the center of the world (no way!), and wonders, “Was anyone who he appeared to be?” IKEA furniture names are weakly poked fun at. Creating an adventure story that is too slow and a wacky tale that tries both too hard or not hard enough, Milligan aims his harpoon high, but ends up with a wash. — Kim Hedges