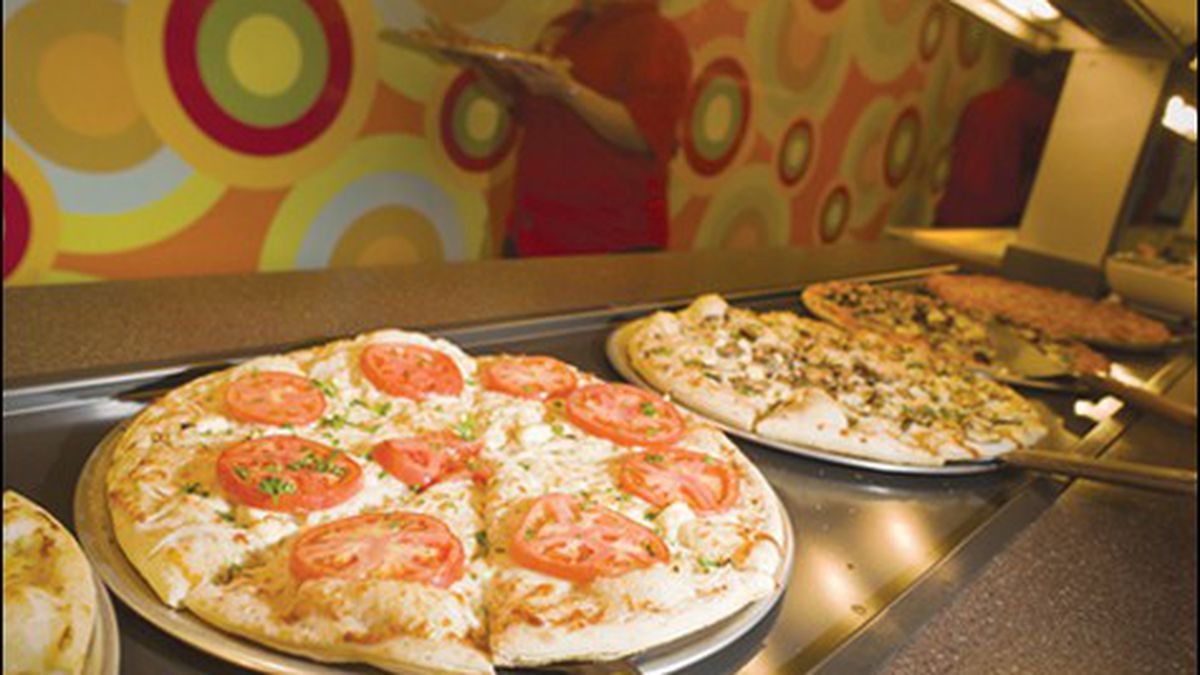 Pig Out at Pepe’s Pizza Buffet

It costs less than round-trip BART fare from Berkeley to San Francisco.

Sometimes it’s okay to stuff yourself. Not as a practice. Not as a policy. Not three times a day or even every day, but now and then: to eat as much as you want, then a little more, then maybe (think of all the starving children everywhere) a little more. It’s fun.

It is not crass. Nor is it necessarily the superhighway to obesity. Stuffing oneself can be as nuanced as any other activity. At Pepe’s, you can stuff yourself with salad and/or soup and/or pizza and/or pasta and/or nachos and/or tacos and/or dessert, each for its own unique nutritional effect.

Open since March, Pepe’s is a pizza buffet: “A True Pizza Buffet,” declares its menu and a giant printed sign near its front counter, as if it were not to be confused with some kind of false pizza buffet. A squeaky-clean stainless-steel self-serve area starts with two soups: one vegetarian, the other not. Like everything else here, the soups are made in-house.

The salad bar offers a vat of iceberg lettuce (for traditionalists), another vat of assorted greens, and a dozen-plus vats bearing salad components from chickpeas to pineapple to jicama to hard-boiled eggs, six dressings (including exotic ginger-sesame), and not one but two forms of beet: sliced and julienned. Feel deluxe yet? Behold potato salad, macaroni salad, pizza: five with meat toppings, five without, plus an outrageous bonus: butter-brushed sweet pizza drizzled with chocolate, caramel, marshmallow sauces, multicolored sprinkles, and chocolate chips. Doughnut-delicious yet earthy-sophisticated as befits pizza, it’s what cerebral urban circus clowns might eat. All of Pepe’s pizzas are replaced and refreshed every fifteen minutes. Ditto six pastas with ever rotating sauces.

Imagine all this, as much of it as you desire and more, for just $6.99. And plans are underway to add more Mexican options over the next few months and expand Pepe’s hours until 2 a.m.

So this might be the perfect restaurant. Come on, now: How is it not? Because it’s self-service? Some diners prefer not to be fussed over by servers, which feels fake anyway. At buffets, you don’t have to tip. Do you think buffets are lowbrow? Fine. Order off the menu à la carte. (It costs more, though.)

A US Foodservice culinary chef advises Pepe’s staff. They use 5,000 pounds of whole-milk mozzarella every month. The soups are a bit salty, but Pepe’s is a big cut above typical bargain-buffet fare.

On both of our visits, the iceberg lettuce was ebulliently crunchy; one one visit, a few bum leaves marred the mixed-lettuce vat. The blue-cheese dressing sports chunks so big they block the squeeze-bottle’s spout. A surprise winner, the potato salad is so fresh and multitextured that it could make a meal all by itself. Six standard pizza types — including pepperoni, spinach, olive, tomato, and plain — are augmented by ever-changing specials such as feta, barbecued chicken, and jalapeño. We tried many types and found them crispy-chewy, generously cheesed, thickish-crusted — half an inch high — and more or less artisanal. The pasta sauces, too, are cooked with care, especially an Alfredo with sautéed mushroom slabs the size of poker chips.

You can build your own tacos at the dozen-options taco bar. But subvert the dominant paradigm. One of the beauties of buffets is that they let you employ ingenuity. Festoon tortilla chips from the nacho machine with taco toppings for actual nachos. Supersize each pizza slice with taco toppings: tomato, olives, and cheese. Why not make taco salad with chopped veggies, beans, cheese, chips, lettuce, and dressing: preferably Thousand Island? Ice cream plus root beer equals a root-beer float.

As big as a bowling alley, set below street level a block south of UC Berkeley, Pepe’s seats more than two hundred. Even with seventy seats filled, a place this size feels nearly empty.

Matching the plates and bowls and workers’ uniforms, ladybug-red — or is it Stanford red? — tables with neat pale wooden chairs offset freshly painted yet sadly snot-green ceilings. A wall-size flatscreen TV airs sports nonstop, which is distracting. Ample rugs absorb much of the sound here — so, ironically, a meal at Pepe’s is easier on the ears than at those trendy, smaller, and potentially more intimate restaurants (Burma Superstar and Homeroom, I’m looking at you) that pride themselves on an ear-splitting din. Having the sports turned down or off would be ideal, but a mega-TV helps lone diners feel less alone, and makes most everyone feel more at home.

That’s yet another beauty of buffets. Ambling back and forth, choosing however much we want of what we want, is how we eat at home — but at buffets, we need not cook nor clean. At buffets, it’s not a cliché: Within reason, you can have it your way.

A young Mandarin-speaking couple watch a worker set out two piping-hot new pizzas, then eagerly serve themselves. This is how you might imagine restaurants in the future, on space stations: international, unlimited, ship-shape, and cheap.

Pepe’s disproves the meme that poverty leads to obesity because (as that meme says) the poor cannot afford nutritious food. All-you-can-eat at Pepe’s costs less than round-trip BART fare from Berkeley to San Francisco, less than one hour’s minimum-wage pay. All-you-can-eat at Pepe’s can be low-fat, low-carb, vegetarian, vegan, gluten-free, or even totally raw. Or not. This place is evidence of the abundance of our system, the economy of scale. As long as Pepe’s and its kind exist, excuses can’t.