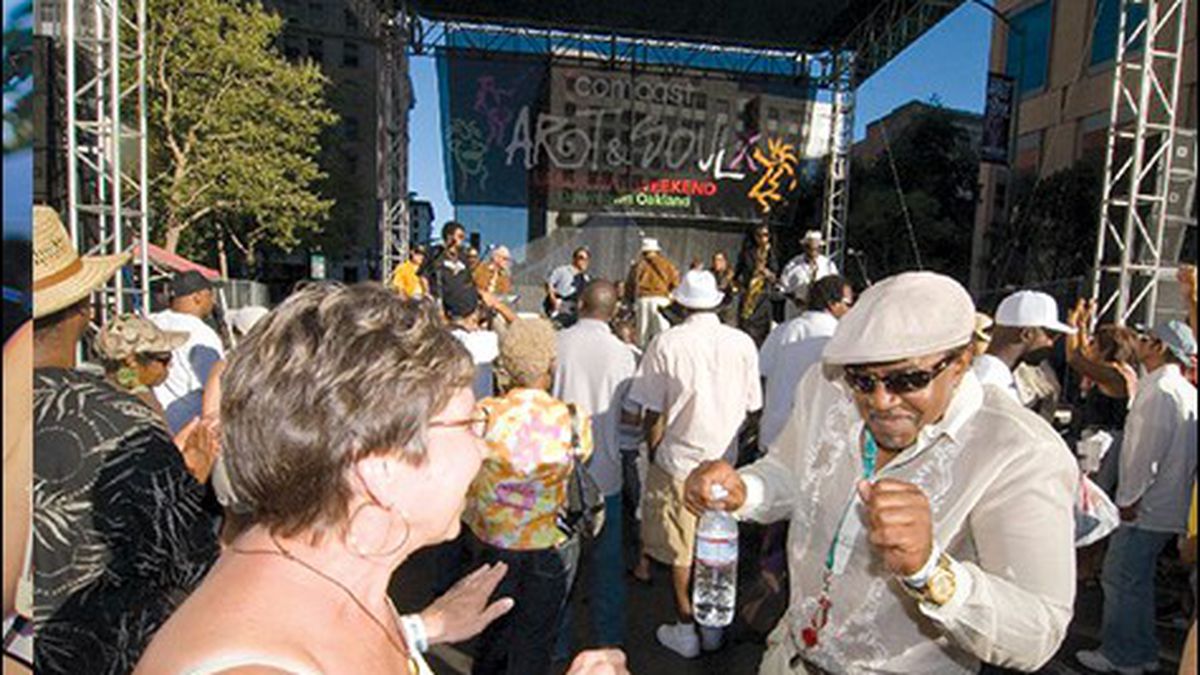 When Samee Roberts founded Oakland’s annual Art & Soul Festival in 2001, it was pretty quiet in downtown Oakland. “Art Murmur didn’t exist, the nightlife scene was virtually nonexistent, and no one was around on the weekend,” said Roberts, who is the Marketing Manager for the City of Oakland. “It was sort of an open Oakland palace for us. We got to create something from scratch.”

Roberts’ hope was that the music and art festival would activate downtown as the core of the city and that the energy would then radiate throughout the city. “It really did,” she said. “It activated an area that was really dormant. Whatever role it played, we’re happy about that as far as downtown goes.”

Over its fourteen-year history, the festival, centered around Frank Ogawa Plaza (1 Frank H. Ogawa Plaza, Oakland), has evolved in terms of its offerings, but it has stayed true to its goal of being a community-focused event. To that end, Roberts has always encouraged community members and groups to organize festival events and curate music stages — such as the blues stage, which has been managed by the Bay Area Blues Society since Art & Soul began. This year, two new community events include Whiskey Rebellion, a showcase of American whiskey distillers and producers, which will be a fundraiser for Oakland Grown, and the festival’s first barbecue competition, organized by Bike East Bay advocacy director Dave Campbell.

Campbell, who grew up in Georgia, has had a lifelong affinity for barbecue and was motivated to start the Oaktown Throwdown BBQ Competition by the recent increase in barbecue restaurants in the East Bay. “Oakland has a good barbecue history and obviously lots of barbecue enthusiasts, so I thought it would be a popular attraction,” he said. There will be a professional and amateur (backyard) competition during which 37 teams — about a third of which are local — will cook chicken, pork, ribs, brisket, and tri-tip. Forty judges will decide on the grand champion, and there will be a people’s choice award as well. Sampling hours will be from 1:30-4:30 p.m. on Saturday.

Other new elements this year include a performance by Oakland-based dance company Bandaloop, who will perform a vertical dance off of the façade of City Hall, a Hot Rod and Vintage Car Show, and a preview performance of the local talent competing in this year’s National Poetry Slam, which is taking place in Oakland from August 5-9. YAK Films will also be hosting a Turf & All Styles Dance Battle on Saturday.

For Campbell, the local focus and lack of outside event bookers makes sense. “We give ourselves an opportunity to celebrate our city,” he said. “We don’t need to hire outside experts to tell us how to have a good time.”

Saturday and Sunday, Aug. 2 and 3. $7-$10, free for children twelve and under. ArtandSoulOakland.com

Next ArticleMid-Week Menu: Cask and Philz Open in Berkeley, and Roli Roti Acquires a Huge New Production Facility in Oakland