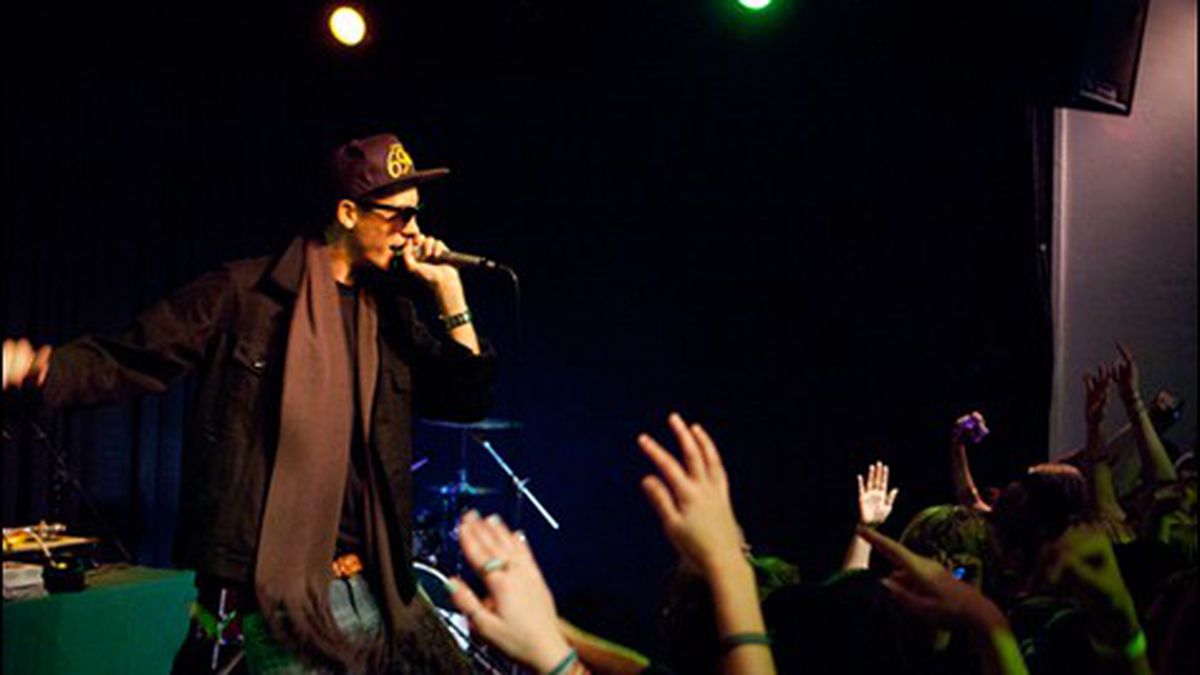 Berkeley rapper may be destined for fame.

Berkeley rapper G-Eazy has a very auspicious stage name. It could refer to an idiomatic expression (“be easy, son”), or a more famous emcee (Young Jeezy). It could be a kind of pig Latin of his government name, Gerald Earl Gillum. He says it actually dates back to elementary school. “I went by G.E. as a kid,” the emcee confessed, interviewed by phone the day after a sold-out show at La Peña Cultural Center. “I thought my real name was dorky.” It wasn’t long before kids began elongating the “E” part to “Easy.” All he had to do was change one consonant. The handle was pre-ordained.

As were many things about G-Eazy, who graced La Peña for his homecoming concert last Friday, wearing black shades, a long scarf, and a glittery Michael Kors watch. “When I say G, y’all say Eazy!” yelled DJ Elmo, who comprised one half of the rapper’s rhythm section — the other half, drummer Will Baldocchi, sat at a trap set in the corner. G-Eazy grinned childishly as he grabbed the microphone. A guy roved around stage with a video camera, documenting the rapper’s every move. Elmo cued up the track for “Intro (Roundz),” a rattling patchwork of snare and kick drum, over which G-Eazy bragged, I devour beats like a carnivore.

Thin and wiry, with small, handsome features and a nasal white-boy rap cadence, G-Eazy had nonetheless figured out how to look more famous than anyone else in the room. Perhaps that’s easy when you’re rocking an all-ages show at La Peña, and the majority of your audience goes to Berkeley High. But it also shows how much the rapper has matured since playing the same gig last year. In the interim, he toured with Drake and Lil’ Wayne — a résumé-booster that he gamely shared with the audience — cut his fourth LP, Big, and entered his senior year at Loyola University in New Orleans, where he’s pursuing a BA in music industry studies.

More importantly, he now has the fourteen-year-old-girl crowd on lock. Hordes of high school girls, and their male suitors, had gathered outside La Peña by 10 p.m., still a good hour and a half before G-Eazy was set to go on. The kids treated it as a Berkeley High house party. They stood in one giant clump amid discarded cans of Old E and Four Loko. The boys were dressed to be extras in a Harmony Korine movie. The girls were dressed for the beach. Had they stood outside twenty minutes longer, the headline of this article would have been, “Children Perish of Hypothermia While Queuing Up for G-Eazy Rap Show.”

In fact, the rap show almost didn’t happen. At 10:40 p.m., a fight erupted on the dance floor, right as Elmo was pumping the high school-age crowd with radio hits by Too $hort and Far East Movement. Someone snapped the lights on. Kids who hadn’t yet gotten in booed angrily in the vestibule. Five minutes passed, and the music came back on. The party resumed as though nothing had happened.

G-Eazy was unperturbed. Buoyed by opening acts Hard Knock and Priceless, he had the carriage of a real famous person. Eazy says he learned some of that from watching Lil’ Wayne and Drake from afar. “They’re pretty closed off,” he admitted. “They’d go from the show to the tour bus to the hotel. We’d go to the same after-parties and be in the same VIP section, but they always had groupies everywhere.” But, he said, a newbie rapper could learn a lot just from watching his betters, even if he wasn’t getting heart-to-heart talks. G-Eazy came back from the tour knowing how to format a show, work a crowd, and develop an instant rapport with the audience. He learned how to accessorize. He learned how to act fabulous.

It certainly paid off at La Peña, where G-Eazy cycled through half a dozen songs at a fast clip. His set list included “California Culture,” an anthem that referenced Biggie’s 1997 hit “Going Back to Cali”; an oldie-but-goodie from the 2009 Quarantine mixtape; a saccharine ballad called “Candy Girl”; and an ode to the children’s cartoon Dexter’s Laboratory. He invited Priceless back onstage for two tracks, including “Mango,” which is about oral sex. G-Eazy had several family members in the crowd that night, including an aunt, uncle, and grandmother. They hung out in back and nodded to the beats, either ignoring or quietly tolerating the lurid quality of G-Eazy’s lyrics. “The music’s so loud, you can’t usually pick up on it,” the rapper said later. “And they understand I’m a Gemini.”

Perhaps it’s no big deal to sell out a show at a small cultural center in your hometown. But G-Eazy appears to know what he’s doing. He launched his rap career in high school with the help of GarageBand software and a $20 mic from Radio Shack. At age 21, he’s already four albums deep, and he appears to have a shrewd business acumen. “It’s a huge jump from mid-range artist to big,” the emcee said, acknowledging that he’s still well behind tourmates Drake and Lil’ Wayne. “Drake pulls in three hundred grand a night, per show. … First you’re getting nothing, then you’re getting paid big.”

For now, though, he’s pretty good at playing the part. One song at La Peña had G quoting the old hip-hop adage about “Mo’ money, mo’ problems.” That would be hubris, coming from the mouth of any other 21-year-old emcee. In G-Eazy’s case, it was prophetic.