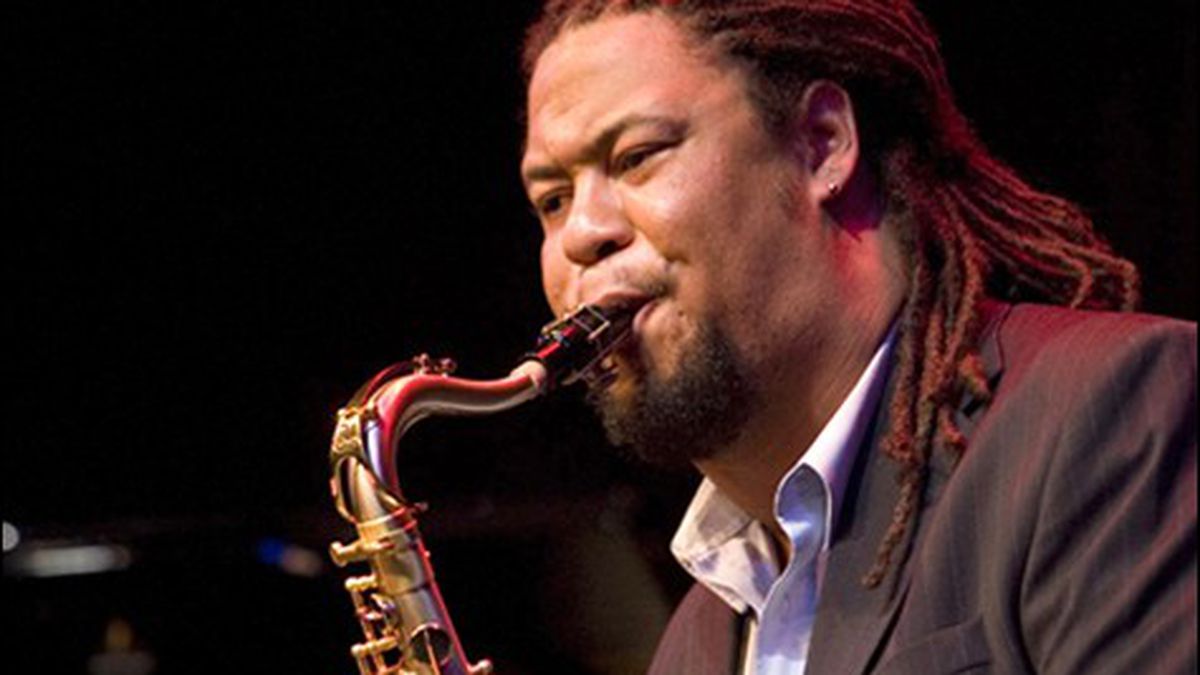 Almost every gig tenor saxophonist Dayna Stephens plays is with a different band, but when he tours the West Coast, it's a reunion of sorts.

Playing jazz, particularly for world-class musicians such as tenor saxophonist Dayna Stephens, drummer Eric Harland, and bassist Jeff Denson, is often like a game of musical chairs: One night they’re leading their own band; the next they’re working as sidemen in someone else’s. And when they’re not playing live, they’re teaching. Talking to Stephens, who recently returned to the Bay Area as part of a string of California performances, it’s clear that everyone seems to be in it together.

“We all love this man right here,” said pianist Taylor Eigsti to some 140 friends, family, and fans who crowded into the Piedmont Piano Company at a benefit for Stephens on Sunday, February 17. Eigsti has known the saxophonist since he was an eleven-year-old prodigy and Stephens was a seventeen-year-old student in UC Berkeley’s Young Musicians Program. The benefit, to help raise funds for the now-34-year-old saxophonist’s kidney dialysis treatments and eventual transplant, was the third in a series of California dates for Stephens as a special guest with Eigsti’s trio. The saxophonist had flown in from his home in Patterson, New Jersey, for three weeks’ worth of performances up and down the state — first with Eigsti, then with a group of Los Angeles friends, and, finally, with a quartet led by Berkeley-based bassist Denson and San Diego pianist Joshua White.

“I’ve kinda gotten into this pattern where every gig I have is with a different band,” Stephens said. “There are so many cats in New York that I love and wanna play with. I just try to get an opportunity to play with all of them. “

Stephens was in typically top form at the benefit. His fat tone was warm and sweet, and his fluid lines were filled with unexpected twists and turns. a brief burst of staccato notes from his horn during an original tune titled “Dah-Dot-Dah” was answered immediately by Eigsti before Stephens ripped into his next phrase. Harish Raghavan anchored the swing groove with an undulating flow from his bass, and drummer Eric Harland fired off an amazing barrage of cross rhythms on the heads of his snare, toms, and bass drum while maintaining an unflagging pulse on a K. Zildjian ride cymbal.

Harland, one of the most creative and in-demand drummers in jazz today, left the bandstand after the second song in order to catch a flight to begin a ten-day North American tour with the Chris Potter Quartet that stopped at Yoshi’s Oakland on Sunday, just a week after the Stephens benefit. The Houston-born Harland is scheduled to be back in the Bay Area on Thursday, March 7, at the SFJAZZ Center to perform with the Zakir Hussain Rhythm Summit. He’s been a member of the SFJAZZ Collective for the past eight years and Charles Lloyd’s drummer of choice even longer. And he played on both Stephens and Eigsti’s most recent albums, among numerous other credits.

Malachi Whitson, a young drummer from Richmond who is currently studying at the University of the Pacific’s Brubeck Institute in Stockton, took over the trap set for the next tune, “Radioactive Earthworm,” a Stephens-penned ballad. The saxophonist told the audience that Whitson’s mother had been his voice teacher when he was eight. Eigsti departed after that number, and the entire Brubeck Institute Jazz Quintet, which had helped organize the benefit, took over the bandstand to back Stephens on his blues composition “Doctor Wong’s Bird Song.” The students followed Stephens’ every shift of time signature — from 7/4 to 4/4 to 3/4 and back to 7/4 — with the aplomb of professionals.

“Doctor Wong’s Bird Song” was written for onetime KJAZ deejay Herb Wong, who, as principal of Berkeley’s Washington Elementary School in 1966, initiated a jazz course there that soon spread to schools throughout the district. Stephens had transferred from Alameda High to Berkeley High for his senior year, specifically to play in the school’s long-celebrated jazz band, through which many great musicians had filtered through over the years.

“I wanted to be in an environment where there were kids as dedicated to the music as I was,” Stephens explained a day earlier, when we spoke just before his afternoon performance with Eigsti’s trio at Woodside Priority School in Portola Valley, the pianist’s alma mater. The concert was hosted by Dr. Wong himself.

After high school, Stephens attended the Berklee College of Music on a scholarship, then studied at the Thelonious Monk Institute at the University of Southern California, where one of the instructors was the venerable saxophonist and composer Wayne Shorter.

“Wayne came for a week,” Stephens recalled. “Every second he was in our presence, I had a mini-disc going. I still have those mini-discs, actually.”

Since moving to New Jersey eight years ago, he has been leading his own group (currently featuring the innovative young guitarist Julian Lage) and working with such heavies as Kenny Barron and Tom Harrell. He returns to the Bay Area about twice a year to perform and teach at the Stanford Jazz Workshop and Brubeck Institute.

Stephens’ old Berklee buddy, bassist-composer Jeff Denson, dropped by the Piedmont Piano benefit but didn’t play. The old friends will play three local engagements this weekend, in Berkeley, Oakland, and San Francisco, as part of a quartet co-led by Denson, who has been a professor at the Jazzschool since the summer of 2011, and San Diego pianist Joshua White.

“He’s a versatile player in the sense that he can swing and play the straight-ahead stuff, and he can also play really open — freer, I should say,” Stephens said of Denson. “Those are the two distinctions I really like playing myself,” he said, adding, “that’s something I also like about Joshua White. He has a really strong hand in the tradition, but on the spontaneous front, you never know what he’s gonna do. All of his influences just come to the surface.”

Denson also leads a quartet that features trumpeter Ralph Alessi and a trio called Minsarah that has been touring and recording for the past six-and-a-half years with alto saxophonist Lee Konitz, who, at age 85, is one of the few jazz giants of the Forties still performing. Last year, however, Denson had to skip a concert and recording session with Konitz in Germany due to his duties at the Jazzschool, which include teaching several ensembles, ear training, jazz history from 1960 to the present, bass and other instruments, and The Beatles and their role in the development of Sixties’ counterculture.

“You can’t do everything,” said Denson.