.Getting Stuffed on Arepas at Miss Arepita and Venezuelan Cafe

With a mobile vendor and a popup on the vanguard, Venezuelan food takes root in the East Bay. 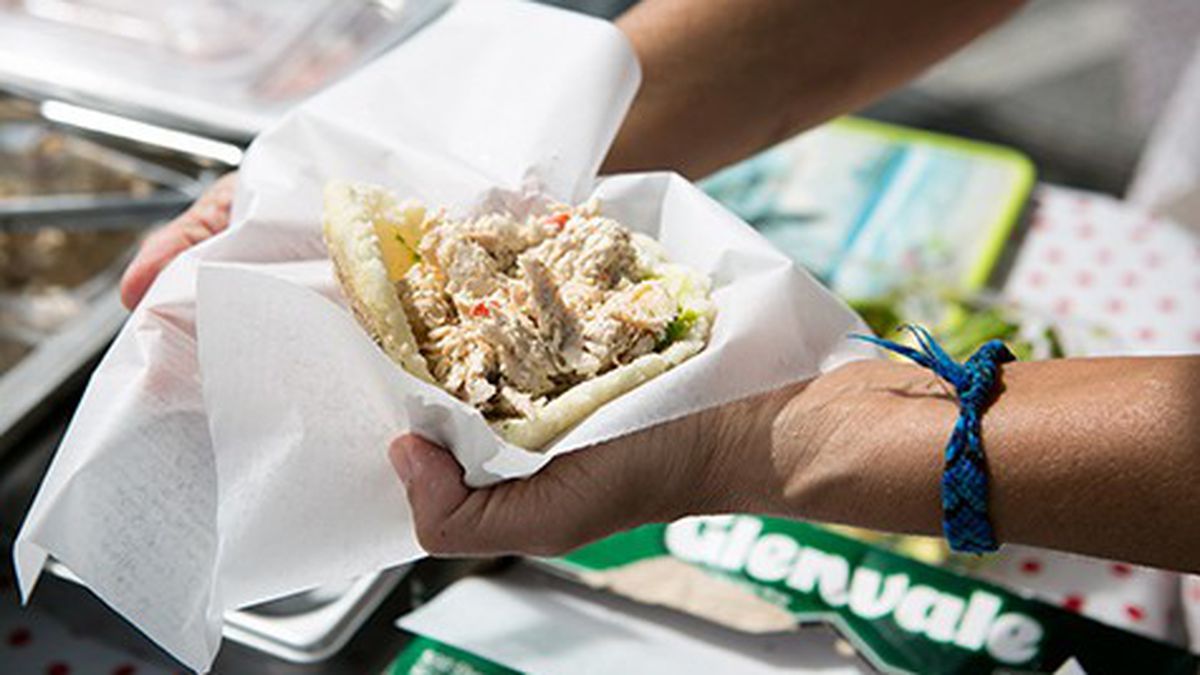 The joy of eating a Venezuelan arepa, a kind of griddled corn cake, is one of great abundance: The skilled arepa maker takes a disc of corn-flour dough and griddles it until it’s fluffy and crisp-edged, then slices it open, like a toasted English muffin, and fills it with such an impressive quantity of meat, beans, or cheese — or some combination of all three — that the whole thing threatens to come apart at the seams. The only problem is that arepas are still a relative rarity in the East Bay.

Because of the growing popularity of gluten-free diets, a handful of restaurants have started serving arepas — perhaps most notably North Oakland’s Victory Burger, which offers an “arepa bun” option for its burgers. But until recently, we haven’t had a true arepa specialist, let alone a stand-alone Venezuelan eatery. Now, thanks to two plucky entrepreneurial efforts — an Oakland-based mobile vendor and a Berkeley popup — that’s finally starting to change.

Miss Arepita is the East Bay’s first dedicated arepa purveyor, a mobile arepa stand whose proprietor, Carolina Abolio, started her business a year ago with the assistance of the kitchen incubator program at Oakland-based Phat Beets, a food justice organization. For now, you can find Miss Arepita on Saturdays, 10 a.m.–2 p.m., at the Phat Beets farmers’ market in North Oakland (at 970 Grace Ave.), and on Sundays, noon–3 p.m., at the Bites at the Lake food truck pod, near Lake Merritt, in the parking lot of the Lakeview branch of the Oakland Public Library (550 El Embarcadero).

The outdoor stand at Bites at the Lake is a two-woman operation: A friend takes orders while Abolio keeps a watchful eye on the arepas cooking on the flat-top griddle, and fills each sandwich to order. It’s a relatively low-tech setup, and the menu is short and to the point: five or six varieties of stuffed arepas, plus papelón con limón, a deliciously smoky-sweet cold beverage that’s made with pressed raw sugar cane and lime juice.

For her arepas, Abolio makes a dough using Harina P.A.N., a popular brand of precooked corn flour, to which she adds salt and water, using traditional techniques that she learned from her older sister and her cousin in Venezuela. “In Venezuela, you learn two things when you’re growing up: playing cuatro and making arepas,” she explained.

Her arepas were puffy and almost snowy-white, with just a hint of color and a thin film of crispiness all around their surface. The downside was that the wetness of the fillings made these prone to sogginess, which meant the arepa sandwiches started to fall apart after a while.

What fillings, though! The most classic, the pabellón, was a hearty combination of slow-braised beef, tomato sauce (a nod to Abolio’s half-Italian heritage), black beans, nutty queso fresco, and thin slices of plantain that added just a hint of sweetness. But my favorite was the reina pepiada, a deceptively simple chicken salad — just shredded roast chicken (both white and dark meat), mayonnaise, and just a hint of finely diced onion and red bell pepper, with two avocado slices on the side. Everything was perfectly balanced — savory, moist, and just rich enough.

Most of Abolio’s recipes are traditional, but she has incorporated a few original flourishes. Her “veggie calipso” arepa, stuffed with a sauté of seasonal vegetables (sourced from Phat Beets and from the Castlemont High School garden program), is unlike anything you’d find in Venezuela; instead, she credits cooking methods she learned from Asian chefs. And her red picante sauce — which had an appealing, layered heat — borrows from Mexican cuisine’s knack with dried chilies. On the other hand, Abolio said her green guasacaca sauce, a tangy cilantro-based condiment similar to a chimichurri, is the same recipe employed by countless old ladies in the Venezuelan Andes. The latter, in particular, upped the deliciousness quotient of each arepa by a factor of two or three.

For those who want to explore the world of Venezuelan cuisine beyond just arepas, Venezuelan Cafe is a popup hosted by the West Berkeley Vietnamese fusion restaurant Cafe V — “V” for “Vietnam” and “Venezuela,” though that was more a matter of alphabetical serendipity than premeditated wordplay.

As Cafe V owner Hamei Hamedi tells it, the story of the popup’s very existence is a kind of classic American Dream narrative: Juan Polanco, a dishwasher at the restaurant, had been selling his wife Vanesa’s food on the side to make extra money to help support his family in Venezuela. When he asked his boss about additional arepa-selling opportunities, Hamedi pitched him on the idea of doing a popup three days a week. Now, some three months later, the whole enterprise is such a success that Hamedi has decided to turn the entire menu over to the Polancos, making Cafe V the East Bay’s first full-fledged Venezuelan restaurant. The changeover will likely take place sometime next month.

Although Vanesa Polanco uses the same Harina P.A.N. base as Miss Arepita and any number of Venezuelan home cooks, the arepas at Venezuelan Cafe have their own distinctive character. At Miss Arepita, the arepas were thicker and fluffier, and tasted somewhat more intensely of toasted corn. But I found myself favoring Venezuelan Cafe’s versions, because they were crispier and more well blistered, thanks to a long sear on the griddle, which also helped yield a more sog-resistant sandwich vessel.

Venezuelan Cafe also offers — by virtue of the fact that it has a fully equipped restaurant kitchen at its disposal — a lot more variety: twelve options for the arepas alone, with a full range of traditional fillings, including chicken salad and pabellón, and a handful of original creations. An off-menu “pulled pork” special featured big chunks of roasted pork and a mountain of shredded cheese, about half of which had melted and fused to the surface of the meat, cheeseburger-like. The pork itself was a bit overcooked, but a squirt of potent housemade garlic mayonnaise compensated for any dryness, and the whole sandwich was just so gloriously overstuffed, it was hard to complain.

Because the bulk of the popup’s hours coincide with weekend brunch, I gravitated toward the more breakfast-y options on the menu, settling on something called the AreSandwich — a deep-fried arepa stuffed with a fried egg, ham, tomato, and another avalanche of shredded cheese. Although I wished the egg’s yolk had been runny, this was an otherwise unimpeachable breakfast sandwich. I loved the contrast of the hot, extra-crispy arepa with the coolness of the sliced ham and cheese, and the no-fuss proletarianism of the condiments — ketchup, mayo, and mustard.

You would be wise to save room for some of Venezuelan Cafe’s non-arepa offerings. The tequeños — stretchy cheese sticks that were wrapped in a pastry crust and deep-fried — invite comparison to chain-restaurant mozzarella sticks, but only in the sense that they’re so much better; the addictive saltiness of the melted Cotija cheese cut by a simple ketchup-mayonnaise dip. Kids, in particular, go crazy for these. Even sliced plantains — so often a throwaway side — were fried with an uncommonly skillful hand.

The most pleasant surprise were the empanadas, which were prepared in the Venezuelan style, with a maize-based dough similar to what’s used for the arepas. After a dip in the deep-fryer, they had a fluffiness and a toasted-corn fragrance that you don’t get with a more typical wheat-flour pastry shell. The shredded beef version was particularly juicy and flavorful. Just make sure you eat the empanadas right away, before the fried corn dough gets soggy.

For now, a sign in the window is the only indication that Cafe V serves Venezuelan food on weekend mornings and Monday evenings. It’s a trip to chow down on arepas amid Cafe V’s hip-Asian decor — the decorative red firecrackers, the paw-waving ceramic cat. But in just a few weeks’ time, the restaurant will receive a full Venezuelan makeover, and the Polancos, in their newly expanded roles, are busy plotting new dishes and training the rest of Cafe V’s kitchen staff. Given how tasty everything at the popup version has been, there’s good reason to be excited.