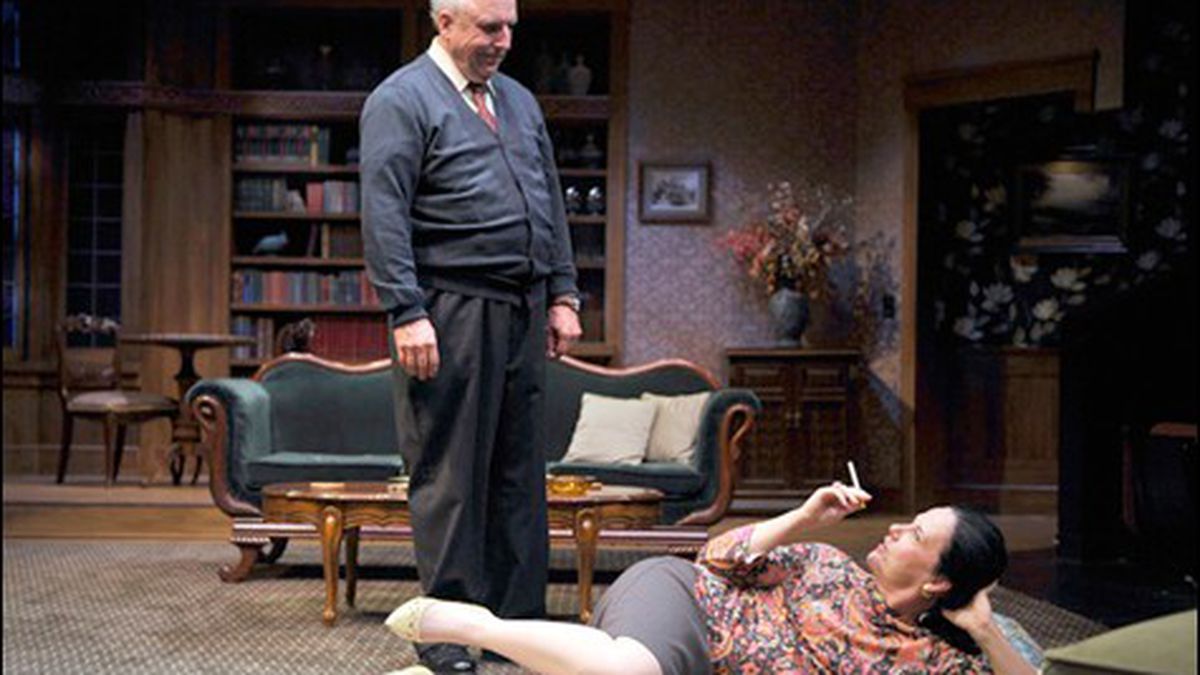 At some level, playwright Edward Albee must be a masochist. Or a sadist. He’s at his best when trafficking in emotional extremes, allowing characters to twist and manipulate each other, and letting fear flow as freely as alcohol. Such is the case in his 1966 Pulitzer-Prize winning drama A Delicate Balance, about an elder, empty-nest couple whose home is invaded — by an alcoholic sister, a recently divorced daughter, two neighbors who’ve apparently grown tired and scared of their own home, a sudden outpour of long-repressed memories, and something they call “the plague.” The play’s title belies its sordid themes, but it is, in many ways, delicate, especially when left in the hands of an astute director.

Enter Tom Ross, whose new production at Aurora Theatre is as sure-handed as it is dramatic. Ross, who has served at the company for twenty years (six of them as an artistic director) said he’s actually waited a long time to produce this particular Albee play — undoubtedly his favorite. He wanted Kimberly King and Ken Grantham in the two lead roles, but he had to wait for them to age a bit, since central characters Agnes and Tobias are in their fifties. The two are married in real life, and they both have a long history with Aurora: Grantham was one of the company’s founders (he actually interviewed Ross for a general manager position twenty years ago) and King was its first-ever leading lady. All of those details are of course incidental to the production, though they help explain how the two actors are so good at creating a marriage onstage.

The relationship that Agnes and Tobias have is tense and close, marred by past infidelity (or so it sounds — that’s never quite clear in the script), corroded by time and ennui, but still trusting enough that a shared glance can speak volumes. Agnes is one of those stolid, old-fashioned Mother Hens who serves alternately as caretaker and disciplinarian. She is the play’s self-described “fulcrum” and maintainer of “a delicate balance.” Tobias is her chastened husband, characterized by the sharp-tongued sister Claire (Jamie Jones) as “a squire parading around in jodhpurs.” He helps maintain order in the roost, steers clear of sisterly conflicts, tolerates Claire’s alcoholism while trying to ignore her flirtations (in the first act she prattles with him while lying prostrate on the living room floor), and abides by a sense of ethics that usually supersedes his own desires. Grantham plays him as a man of minimalist expressions, meaning he uses a blank physiognomy to convey a wandering emotional palette.

In the script, Agnes and Tobias form a perfect union because they’ve managed to paper over difficulties. Agnes, who opens the play with an eerie premonition about falling apart in her older years, says in almost the same breath that her life is “a rolling, pleasant land, verdant my darling, thank you.” Tobias is, indeed, a diminutive squire, whose duty is to fetch drinks and mediate arguments, now that he’s retired and housebound. And yet, the two actors hoist the full weight of a four-decade-old marriage, complete with its history of betrayals, personal tragedies (including the death of their son, Teddy), happiness, fear, sex, and lack thereof. The actors’ connection is so strong in real life that they’re able to project it through seemingly inconsequential dialogue. Even the up-down cadenzas of their speech patterns help reinforce the characters’ symmetry.

Which makes the play seem almost romantic, even if it’s really about terror, anxiety, age, alcoholism, regret, and what Tom Ross would call “that existential dead-end.” The fear generates from several intruders who upset that delicate balance Agnes has worked so hard to sustain — namely Claire, their hysterical daughter Julia (Carrie Paff), and the needy houseguests Edna (Anne Darragh) and Harry (Charles Dean). Claire apparently resides there permanently, Julia comes and goes, but it’s Harry and Edna who wrench the whole home from its foundation, with their unnamable fears and their bizarre sense of entitlement. The way that Agnes and Tobias react is equally strange, as is their compulsion to over-think and constantly justify their actions.

Albee was about 38 when he wrote the play, which actually seems quite young for a writer to understand so much about relationships and create such fully-formed characters. The naturalness and denseness of his script is only enhanced in this production, with Ross’ patient staging and Richard Olmsted’s discriminative set design, which nails every detail from drink coasters to the bland, flowered wallpaper. Mostly, though, it’s the actors who bring everything into sharp relief. Ross may have waited years to mount this Delicate Balance, but clearly he was right to do so.

Update: A previous version of this article misstated details about Tom Ross’ tenure at Aurora. He’s been the company’s Artistic Director for six years, not nineteen. That version of the story also contained an incorrect quotation from Ross.