.The Mechanics of Pedal Power 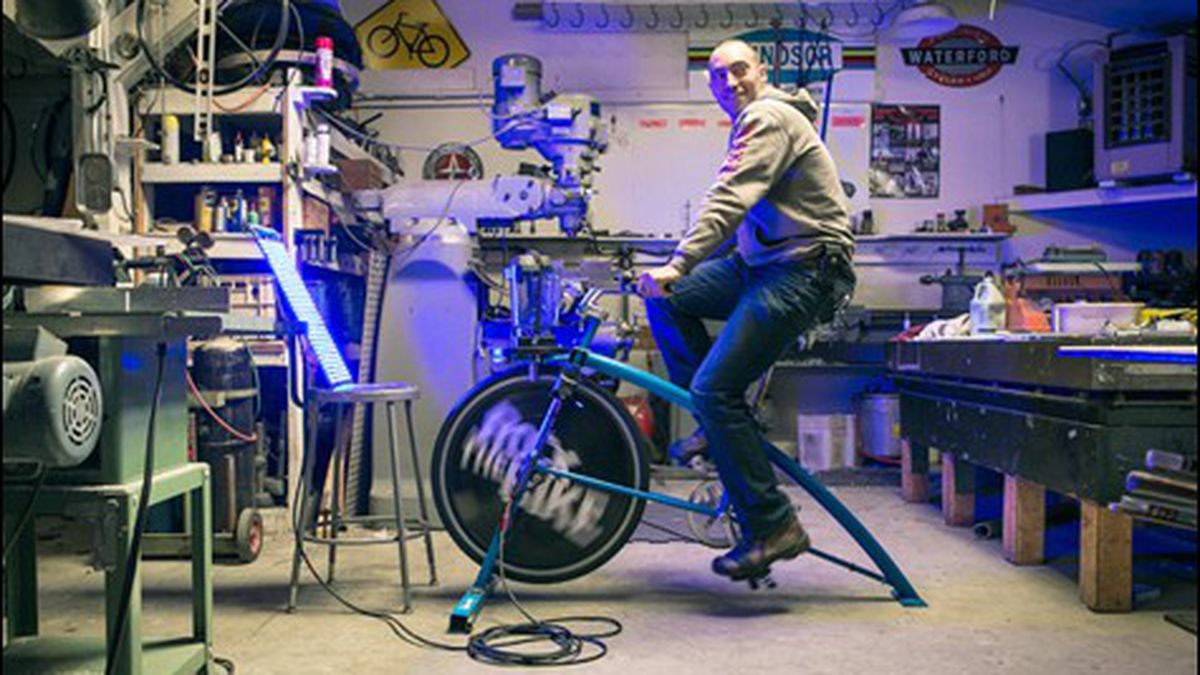 Pedal power: What does that make you think of? Maybe a burly dude, gunning it up a hill on a Huffy? Or a svelte, bird-like racer hugging the roadway as he glides through the lower Pyrenees? As it turns out, pedal power can mean exactly that: measurable energy, and even useful electricity, created by pedaling.

If you’ve been to a local farmers’ market lately, you might have even seen it in action. If not, picture this: someone on a stationary bike, apparently just pedaling in place, but who’s actually doing something very productive. Lo, they hand you a fresh strawberry-banana smoothie!

The pedal-powered machine called the Fender Blender is made right here in the East Bay. And, for pedal-power enthusiasts, the blender is just an entry point into a cleaner, greener way of life.

The Bay Area’s top proponents of pedal power is Rock the Bike, based in West Berkeley. Paul Freedman, Rock the Bike’s founder, has overseen the development of a number of electricity-generating units — including the Fender Blender and the Ice Cream Bike — as well as more utilitarian cargo and utility bikes. He says mechanical machines offer a lot of benefits to consumers over automatic ones. If you want to work on one yourself, though, he advises starting simple: First try a mechanical bike, instead of an electrical one.

“Cost and complexity is a major difference,” said Freedman. “If you can do your task mechanically, it’s going to be cheaper, and it’s also interesting to make mechanical things. Kids, especially, like to see how the gears interface with the tire, you know? There’s educational benefits there.” Soon, you may be ready to upgrade to a real electricity-producing model.

Rock the Bike is primarily an events company. Not only does it host a number of events per year, but it also modifies equipment such as lights and speakers so that they can be run off pedal power. And in order to see these inventions come to life, the company has had to enlist some experts — and break a few rules.

“We engaged the services of a local circuit-hacker to hack into the amps we’re using, in order to cut down on the amount of power that they take up,” said Freedman, who noted that the process voids their warranties. “You have a major loss of energy when the wall power is converted from AC to DC, and because pedal power is already DC, you can get it straight from the bike.”

Rock the Bike also manufacturers electric bikes, such as the Electric Fender Blender Pro, which is capable of producing up to 600 watts of electricity. “You have to have safety precautions so that your circuit doesn’t overcharge and overheat,” Freedman warned. For these bikes, the rear wheels have extra-large hubs, which are loaded up with magnets and coils. When someone on the bike pedals, the magnets move past the coils, creating a high-pressure area of electrons. This electricity flows down into a utility box that Rock the Bike designed to manage the relationship between the power source (pedaling) and the lower-pressure consumer (such as speakers) to which power flows. For this reason, people riding the bike will find that pedaling gets harder when an appliance requires more power.

The company is also working on stylized neon bike lights, a first version of which they recently discontinued in order to develop a foot-long light cell powered by the rider’s own power. The “street glow” effect is pretty, but not entirely legal. Since bicycles fall under vehicle code, anything that isn’t either a head or tail light and white or red, respectively, is considered a violation of vehicle code. But Freedman said lights on bikes are rarely enforced.

Rock the Bike’s bicycle music festival, which goes down every year in August in San Francisco, runs its whole stage system off of roughly four bicycles specifically engineered for the purpose. Not only that, but the nearly thirty folks who put on the festival every year do so in zero-emission fashion. They ride to the event location, hauling hundreds of pounds of gear in their specially made cargo carriers, and even take a performance on the road when they move to their nighttime location.

The electricity-inducing bicycles are fascinating, but the staff’s attitude really represents what Rock the Bike is really about. They’re enthusiastic about something greater than just smoothies. Freedman admitted that the machines’ emissions reduction is pretty negligible. “We’ve all grown accustomed to living a lifestyle that uses a lot of power …. We want the pedal power to feel inspiring, so we focus on the exceptions — things like music and other mechanical activities like blending.”

But, unfortunately, we just use too much power. Even cooking with heat takes too much energy to run with a bike machine. The real issue is transportation.

“If you want to commute by flying or driving, then you are going to way outpace any savings that you’d ever make by pedal-powering. But if you replace your car with a bike, which is really workable for a lot of people, than you’d have a more lasting impact.”

So, while bike machines are fun, Rock the Bike thinks of them as a hook: “We try to use the music events to draw people into peddling, and once they see that the pedaling is fun, then we try to get them to use a bike on a daily basis.

For the mechanically inclined though, there are lots of great ways to explore both the novelty and inspiring reality of pedal power. If you’re really enthusiastic, and satisfy some handiness prerequisites, there are resources available to help you build your own bike machine. Websites such as MayaPedal.org, which promotes mechanical bike machines for assisting with tasks such as agricultural production in Guatemala, is a good example. It features such useful information as schematics and DIY aids to encourage pedal power around the world.

But the easiest way, said Freedman, is to buy the Fender Blender, which can be modified to churn up other things, as well. “Just now, I poured some coffee beans in here, and I’m about to grind them up for my afternoon coffee!” he said. Point taken. The conclusions are for you to draw: Ultimately, would you rather burn coal or calories?