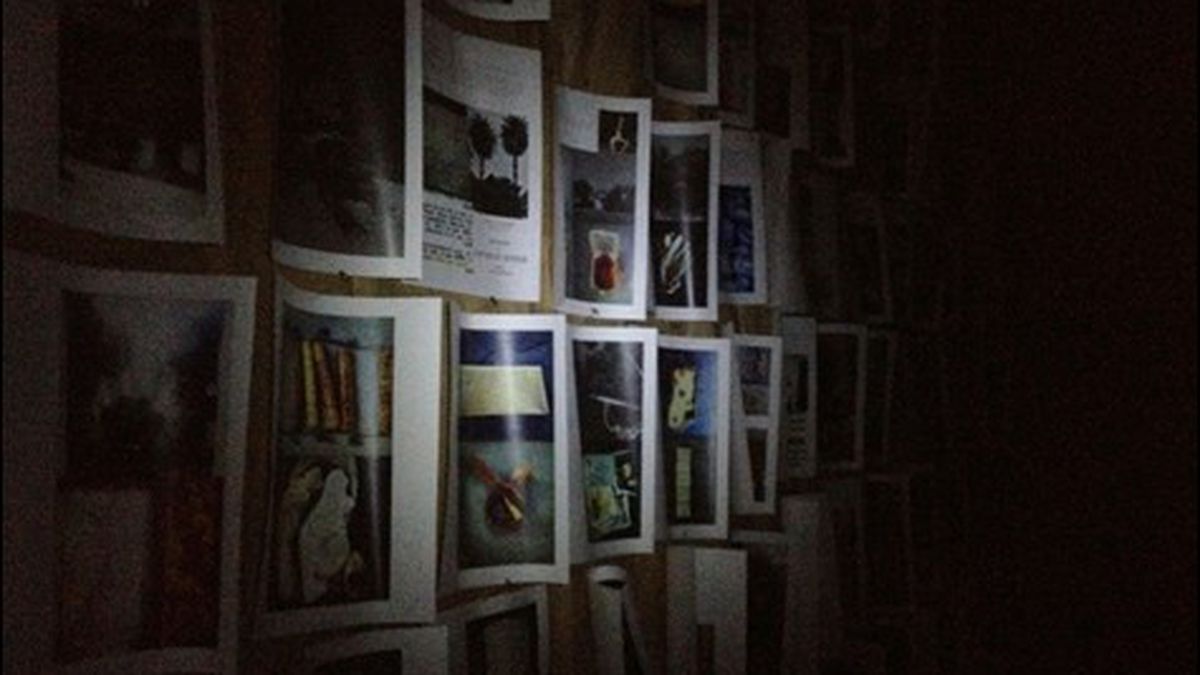 Search and Discover Art at Krowswork

Ursula Brookbank’s SHE WORLD is first a mode of presentation, second a collection of things. A viewer enters the back door of Krowswork to find the gallery, already slightly subterranean, transformed: Its white walls are covered with brown paper, the farther rooms are completely unlit, and, owing to recent weather, it is ice cold. Someone from the gallery will hand you a small flashlight and the show is yours to spelunk — all to a crackling, old-timey soundtrack by Emily Lacy.

The objects that appear (or, depending on where you cast your beam, don’t appear) make up a menagerie of domestic trinkets and ephemera: crochets, yellowed newspaper clippings and old photos, the soles of dainty shoes, the occasional clump of brown hair. All of it clearly belonged to women, few of whom probably remain.

In fact, this is the plunder of the many estate sales, flea markets, and odd shops that Brookbank has visited over the course of many years. The artist pursues this mode of acquisition with all the meticulousness and wonder of a ritual, drafting for each item a report detailing the significance of the item to the person or place from which it came. These plaster one gallery wall like an archival manifest, monument or memorial, conjuring the rich worlds to which this clutter belonged.

As an exhibition tool, the flashlight is perhaps most famously associated with Exposition Internationale du Surréalisme of 1938, whose organizers, André Breton and Paul Éluard, hoped the sudden illumination of works would maximize the viewer’s immediate emotional responses to them.

SHE WORLD, the ghostly, surreal, and somewhat carnivalesque character of which should now be clear, seems to intend just the same in places. Take, for instance, the self-authored photographs that Brookbank includes throughout the exhibition. These dim portraits of women — their bodies all but lost in confusions of limb, lace, and hair — would be difficult to parse even in full lighting. Beneath the roving glare of a small flashlight, they are elusive tunnels through which one could dig endlessly.

More importantly, though, the flashlight brings every viewer into the piece as a performer. The performance, of course, being one of exploration, in effect ennobles the scattered items as objects to be found, not merely objects of loss — whether of their former owners or, as Brookbank puts it, “of a world I’ve known that is rapidly disappearing.” Thus, the show takes on an elegiac more than a funerary character.

For the value in this, we may turn to a quote by Flannery O’Connor, found in one of the reports on Brookbank’s archival wall: “At its best our age is an age of searchers and discoverers, and at its worst, an age that has domesticated despair and learned to live with it happily.”